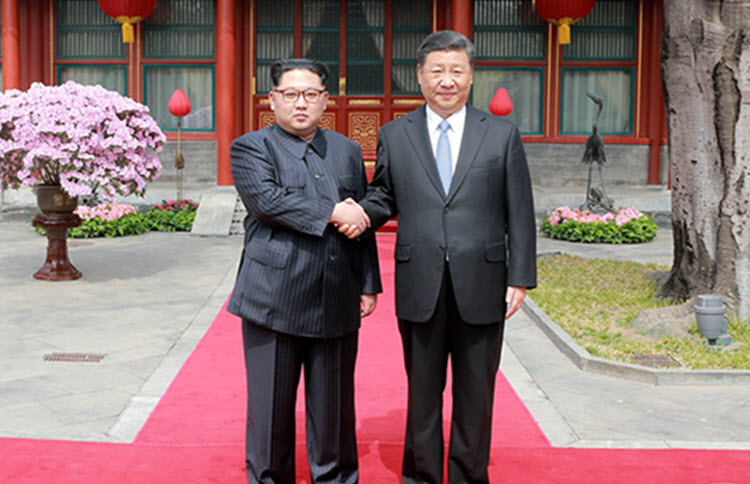 London, 11 Apr – Recently North Korean leader Kim Jong-un met with Chinese President Xi Jinping, which some believe could defuse the tension between North Korea and the US, including the White House, who said they were “cautiously optimistic” about the talks and the United Nations who handled the trip as a “positive” development.

Some, however, are wondering how this meeting and China’s planned meetings with South Korea and the US may affect Iran.

After all, both countries are rogue states with nuclear weapons who repeatedly threaten the West and their allies with ballistic missiles or actually just launch the missile anyway. They also enjoy a close relationship, with many Iranian scientists visiting North Korea to work together on nuclear weaponry, which somehow doesn’t violate the letter of the nuclear deal.

If there is any change to the status quo of the world’s relationship with North Korea, then this could leave Iran out in the cold with both the West and North Korea, but it could also work in Iran’s favour.

Iran, and many observers around the world, are expecting Donald Trump to deal up the 2015 nuclear deal in May. He set that deadline in January for the deal’s flaws to be fixed by Europe and the US, but the Europeans are reluctant and it doesn’t look likely that the next 30 days will bring significant improvement.

It is clear that North Korea will be watching this development closely to see how the US treats its agreements with other countries, and if Trump pulls out of the Iran deal, Kim Jong-un may be less likely to make any agreements with the US.

China is also a key Iran ally and is likely to make the case for Trump staying in the nuclear deal, even without fixing its flaws, in order to secure China’s support for a North Korean agreement. Both Iran and North Korea are a threat to their region and China is likely to say that an agreement is the only way to keep them in line.

However, this is misguided. The 2015 Iran nuclear agreement has failed to keep the mullahs in line. They’ve consistently flouted the agreement and are currently threatening the US with restarting their nuclear programme as soon as the US pulls out. The North Koreans also failed to keep to their agreements made during the 1990s.

Also, with respect to Iran, if the nuclear deal was revoked, many believe it will encourage the Iranian people to rise up against their oppressors and bring regime change to the country. This would bring peace far quicker than the nuclear deal.

Luckily, Trump has recently stacked his cabinet with those wary of the Iran and the North Korean dictatorship, namely Secretary of State Mike Pompeo and National Security Advisor John Bolton. This should encourage him to stick to his guns and withdraw from the nuclear deal.

Iran cracks down on dissent in universities

AP: As they gear up for a major anti-government...