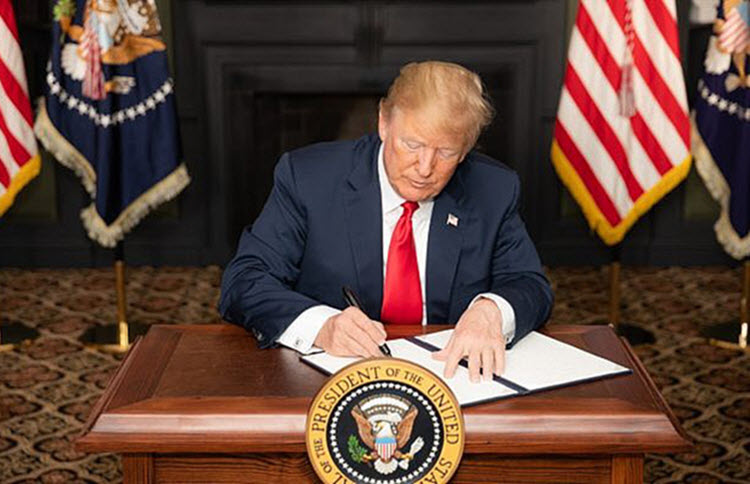 London, 7 August – When U.S. President Donald Trump announced in May that the United States was exiting the Joint Comprehensive Plan of Action (JCPOA), or the 2015 Iran nuclear deal as it is known, he also announced that the crippling sanctions that were lifted as a result of it would be reapplied.

He has been a harsh critic of the nuclear deal and said that he was pulling the United States out of it because it does not fulfil its purpose, rather it guarantees a nuclear arms race in the region.

The first batch of sanctions are due to take effect today. There was a grace period of a good few weeks so that countries with business and trade interests in Iran had that time to sort their affairs out.

Just ahead of the sanctions being re-imposed, thousands of Iranians took to the streets to protest against the rising unemployment levels and the poverty that is worsening across the country. It has been reported that there was at least one protester that was killed by the suppressive forces.

The protesters were heard chanting “Death to the dictator” and there were reports of vehicles and tyres being burned in the streets.

This first batch of sanctions targets Iran’s trade in a number of sectors including gold and automobiles. In November, a second round of sanctions will come into effect and will deal mainly with the country’s energy and banking sectors.

The Trump administration has said that it wants a new deal to be drawn up – one that includes and addresses the many issues that were not dealt with in the JCPOA. In particular, the administration has spoken about Iran’s support for proxy groups in the region and its support of Syrian President Bashar al Assad. Iran’s ballistic missile programme would likely be addressed too.

Trump believes that putting pressure on the Iranian economy will bring Iran to the negotiating table.

The economic situation is rapidly getting worse and the national currency, the rial, is losing value at an unprecedented rate.

President Trump recently said that he is very willing to meet with Iranian President Hassan Rouhani. On August 4th he posted a message on Twitter showing that Iran is in a weakened position. It read: “Iran, and it’s economy, is going very bad, and fast! I will meet, or not meet, it doesn’t matter – it is up to them!”

Yesterday, the Islamic Revolutionary Guard Corps (IRGC), admitted that it has been carrying out military exercises around the Strait of Hormuz. Iran has threatened to cut access to the area in retaliation against Trump’s call for foreign countries to reduce their imports of Iranian oil to zero by November.

However, despite the threats and the military exercises, it is very unlikely that Iran will cut access to the Strait, not least because it barely has the resources to do it properly. Any closure of the Strait would prompt a response from the United States and other countries and Iran will be unable to maintain a closure faced with more sophisticated and better-equipped forces.

Washington Post: As the ebbs and flows of diplomacy...