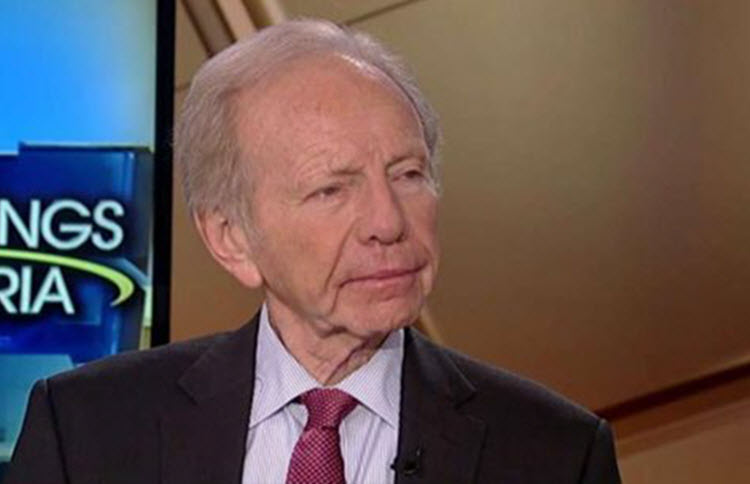 (New York, N.Y.) – On May 10, United Against Nuclear Iran (UANI) Chairman Senator Joseph I. Lieberman and CEO Ambassador Mark D. Wallace co-authored an op-ed on FoxNews.com
applauding the Trump Administration’s “maximum pressure” policy against Iran, including designating the Islamic Revolutionary Guard Corps (IRGC) as a Foreign Terrorist Organization and eliminating sanctions waivers on the purchase of Iranian oil. But as they wrote, more can be done, and that means “plugging the sanctions gaps on the other critical pillar of Iran’s energy export-dependent economy: petrochemicals.”

Senator Lieberman on Monday was also a guest on Fox Business Network’s Mornings with Maria Bartiromo to discuss the op-ed and the situation in the Middle East. He stated that the Iran sanctions are working and called for maintaining the maximum pressure campaign against the regime. Excerpts from the interview and the full op-ed by Senator Lieberman and Ambassador Wallace may be read below.

MARIA BARTIROMO: “You mentioned Iran. I want to talk about the pressure on Iran because the U.S. Air Force says that B-52 bombers have been deployed to the Middle East as a message to Iran. This comes as the U.S. announced it’s no longer extending waivers to countries doing any business with Iran. Eight countries now losing that opportunity. Joe you’re out with the new op-ed with former UN Ambassador Mark Wallace on Foxnews.com titled this: ‘Trump Should Toughen Sanctions On Iran.’ In it, you write, ‘To truly achieve ‘maximum pressure’ on the regime, President Trump needs to make his sanctions airtight across Iran’s economy. This means plugging the sanction gaps on the other critical pillar of Iran’s energy export-dependent economy: petrochemicals.’ Tell us more.”

SENATOR JOE LIEBERMAN: “OK, so the main point of the op-ed on the Fox News website, but also generally our feeling [at] United Against Nuclear Iran – thank you to the Trump Administration, thanks to President Trump. He had the guts to take us out of a bad nuclear agreement with Iran. That’s the beginning. Big change. Second – he imposed sanctions on the Iranian Revolutionary Guard Corps, also big change and increased those sanctions. Iran is hurting – so it’s begun to threaten us and I appreciate very much that the President has basically said with actions, sending American military forces over to the region, don’t think you’re going to strike at us and not have us strike back at you. So now you’ve got the Iranian government in the last few days saying one – President Rouhani of Iran says this is going to be tough on our people, it’s going to be like the Iran-Iraq War of the 80’s, when conditions were miserable in Iran and that shows you how seriously we’re hurting them.”

Sen. Lieberman: “I Think We’ve Got to Hold Tough” on the Iranians.

BARTIROMO: “So where do we go now? Secretary of State Mike Pompeo is on his way there now making a stop in Brussels to talk about this threat from Iran. How do you see this playing out?”

SEN. LIEBERMAN: “Well I think we’ve got to hold tough and we are holding tough and the Iranians are on the defensive. Our European allies, the Russians, the Chinese who signed that Iran nuclear agreement are complaining that we’ve come out of it. But I think in this one, with Iran, we’ve got the momentum on our side. It’s not going to be easy, it’s not without risk, but we’ve changed the reality on the ground and I think we’ve just got to stick with where we are. The Russians will always, we’ve got to understand, try to take advantage of every situation to our detriment. They are not our allies. That’s why I think Secretary Pompeo’s talks directly with President Putin coming up in the next couple of days are really important.”

Sen. Lieberman: The “Iran Nuclear Agreement is Dead. And Nobody is Going to Bring It Back.”

BARTIROMO: “Well, what should be said during that meeting with Putin?”

SEN. LIEBERMAN: “I have enough confidence in Mike Pompeo to believe that he will say this, to say that we have decided that that Iran nuclear agreement is dead. And nobody is going to bring it back and that the Iranians are our enemy. They’re supporters of terrorism, they’re supporting aggression throughout the Middle East and they’re threatening us long term that Russia better understand that we’ve decided that this is a priority, a national interest. In my opinion, it’s the most significant threat. Iran constitutes the most significant threat to the U.S. that there is in the world. And therefore really to basically say to President Putin ‘Stay out of this!’ Now he’s too often come into it in a calculating way to keep Iran going.”

Bloomberg: Iran is pursuing work on a nuclear warhead,...