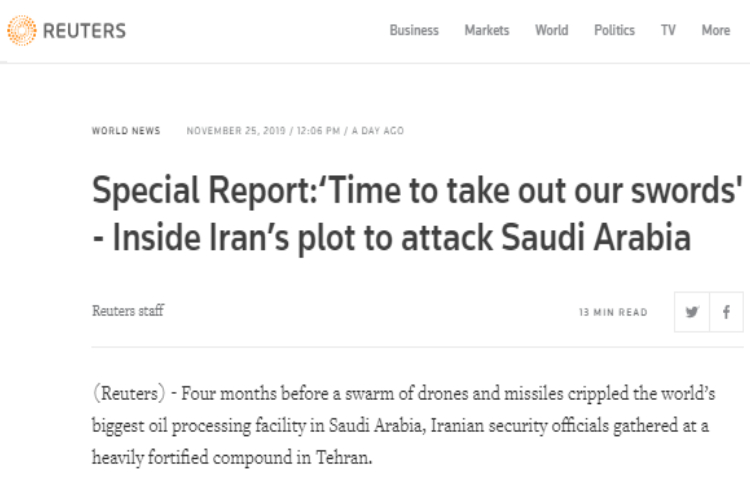 Back in May, Iranian security officials gathered at a heavily fortified Tehran compound to discuss how to punish the United States for withdrawing from the 2015 Iran nuclear deal and reimpose sanctions that have crippled the Iranian economy.

There, Major General Hossein Salami, the Revolutionary Guards (IRGC) leader, said: “It is time to take out our swords and teach them a lesson.”

The meeting was attended by high-ranking officials from the IRGC, which is known as Supreme Leader Ali Khamenei’s army, and many spoke of attacking high-value targets, like US military bases. However, they soon realized that this sort of confrontation could provoke a devastating retaliation from the US.

Their solution, reached after several months, was to launch a drone and missile attack on the world’s largest oil processing facility in Saudi Arabia, a country that is both Iran’s mortal enemy and a US ally.

The attack was carried out on September 14 and now, for the first time, four people have spoken to Reuters anonymously about the planning process; three who are familiar with the meetings and a fourth who is close to Iran’s decision-making.

One of the officials said: “Agreement on [Saudi Arabia] was almost reached unanimously. The idea was to display Iran’s deep access and military capabilities.”

They confirmed that this attack was approved by Supreme Leader Ali Khamenei, even though Iran has always denied involvement. Officially, the Iran-backed Houthi rebels in Yemen claimed responsibility for the attack, but American and Saudi officials say that it was too sophisticated to have been carried out by the group.

US Senator Martha McSally, who was briefed by US and Saudi officials, said: “[The attack] showed somebody who had a sophisticated understanding of facility operations like theirs, instead of just hitting things off of satellite photos” and that the drones and missiles “came from Iranian soil, from an Iranian base”.

Soon after, US Secretary of State Mike Pompeo said Iran had committed an “act of war” and the country was hit with additional US sanctions, as well as cyber-attacks.

The #UnitedStates carried out a secret cyber operation against #Iran after the September 14 attacks on #Saudi_Arabia‘s oil facilities, which #Washington and Riyadh blame on #Tehran, two US officials have told #Reuters.https://t.co/mmLB6wdrPF
#freeiran #MEK @USAdarFarsi pic.twitter.com/LYMBL52BtC

One senior Trump administration official did not directly comment on this story but said that Iran’s “behavior and its decades-long history of destructive attacks and support for terrorism are why Iran’s economy is in shambles”.

It is worth mentioning that on Monday, 30 September 2019, the National Council of Resistance of Iran‘s U.S. Representative Office held a press conference at the National Press Club in Washington, DC exposing exclusive and top secret information sourced from inside the Iranian government

Reports obtained by the People’s Mojahedin Organization of Iran (PMOI/MEK) detailing the missile and drone attack carried out by Iran against the oil facilities of Saudi Arabia.

NCRI provided detailed information about the attack which involved the highest levels of the IRGC who directed it at every step.

AFP: US Secretary of State Condoleezza Rice and Israeli...