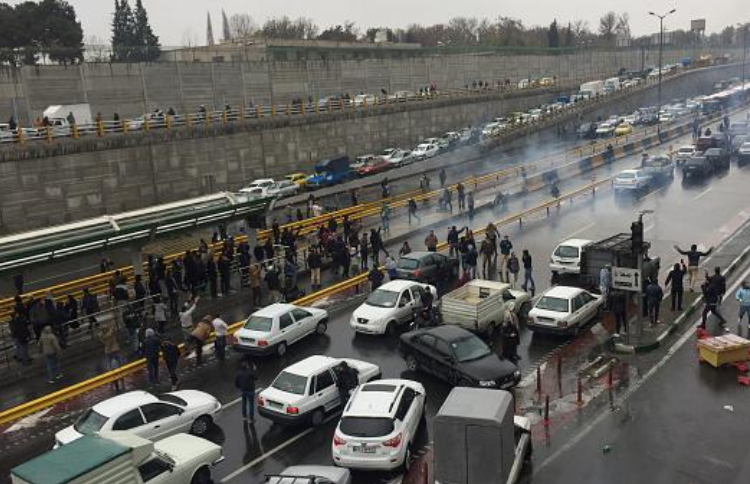 In recent years, the Iranian people have challenged the government time and again. Notably, protests regularly target the regime’s highest official, Ali Khamenei, which displays the popular wrath against the regime in its entirety. A major part of the recent protests against the political system in Iran during the last week has special attributes that separate them from previous uprisings.

While the recent protests were sparked by gasoline price hikes, but in the days that followed a new phenomenon emerged in Iranian society. “The ‘few’ congregations that took to the streets in some cities… were neither concerned with the price of gasoline and its rationing, nor were they protesting against the executive branch alone,” the state-run “Keyhan” newspaper, which reflects the views of Khamenei, wrote in its editorial on November 19.

Factually, the Iranian people well discovered that there is no reformist within the theocratic rule. As students chanted the slogan, “Reformists, Hardliners, the game is over,” in front of Tehran University on January 1. Within the last week, the fed-up people of Iran showed their dismay toward all factions of the regime. Of course, the rulers themselves crossed this illusion out forever.

Remarkably, the Iranian officials’ responding by the iron fist displayed their incapacity to implement reforms. The reality is that the four decades of Ayatollahs’ rule resulted in political deadlock, economic crisis, poverty, discrimination and prejudices against women and the youth. However, they ironically blame imaginary enemies while their terrible background has proven they are the sole enemy of the Iranian people.

In comparison to similar protests in the Middle East and across the globe, the Iranian protests are better-organized. On November 25, the IRGC spokesman Ramezan Sharif underlined “Using high violence and organizing by ‘enemy’” in an interview with the state-run website “Khbar Fori.”

“The past week is in many ways one of the most important pages in Iran’s political and economic history… In a short time, gasoline prices hikes began a series of organized street riots,” the state-run newspaper ‘Vatan-e Emrouz’ printed on the same day.

“Women played a vital role in the recent riots. Uniformed women each have a separate task; one is filming riots, the other is stopping cars, and the other is inciting people to join the riot… Recent rioters, unlike similar cases in the past… are well-organized in their behavior,” the state-run website ‘Khabar Fori’ published on November 18.

Indeed, the country suffers from socioeconomic crises for which the authorities are the first to blame. In this regard, resolving the country’s numerous problems such as corruption, nepotism, costly foreign policies, injustice, and lack of democracy and transparency, depending on a political fundamental change.

Certainly, according to the mentioned attributes, the new round of Iran’s protests is prospected to continue, unless authorities give concessions to the outraged people and revoke their catastrophic decision which means limiting their adventurous policies in the region and debilitation of the oppressive apparatus. Notably, any withdrawal by the regime will encourage the people to continue their struggle particularly when they enjoy having an organized resistance. On the other hand, when the government is losing its power in the region and being weaker due to the U.S. sanctions, it cannot employ suppression forever.

Iran: Russia to sell us aircrafts

Reuters: Iran wants a negotiated solution to its nuclear...