It’s time to get tough on Iran

Foreign Policy: It may be Iran, not the United States or Israel, that strikes the blow that sets off an international conflict. President Obama must act firmly with the Islamic Republic to prevent the situation from spiraling out of control.

It may be Iran, not the United States or Israel, that strikes the blow that sets off an international conflict. President Obama must act firmly with the Islamic Republic to prevent the situation from spiraling out of control. 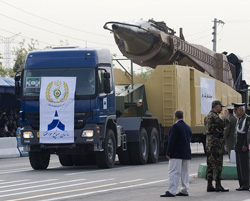 The media has recently been rife with speculation about the possibility of a U.S. or Israeli preventive strike on Iran’s nuclear infrastructure — from former CIA Director Michael Hayden’s observation last month that the drift toward military action against Iran appears “inexorable” to Chairman of the Joint Chiefs of Staff Adm. Michael Mullen’s recent statement that the U.S. military has drawn up plans to attack the Islamic Republic. But, given recent developments in Iran, it is at least as likely that an increasingly belligerent Tehran will be the one that makes the move that sparks a conflict with the United States — whether by an act of terrorism, by facilitating insurgent attacks in Iraq or Afghanistan, or by a military provocation in the Gulf or elsewhere — unless Washington, acting with both caution and firmness, moves to avert such an eventuality.

There are a number of reasons that Iran, rather than the United States or Israel, may act first. Supreme Leader Ali Khamenei, President Mahmoud Ahmadinejad, and other senior officials have proclaimed on numerous occasions their belief that the United States is a declining power, that the international order that underpinned U.S. influence is crumbling, and that U.S. strength has been sapped by long wars in Afghanistan and Iraq.

In his September 2008 address to the U.N. General Assembly, Ahmadinejad asserted that the “American empire … is reaching the end of its road,” while in his speech to the same body a year later, he heralded the coming demise of “liberalism and capitalism,” decried the failure of “the political and economic structures created following … World War II,” and called for the reform of the United Nations, the international economic order, and the entire system of international relations. Khamenei has likewise declared, during a meeting with Iranian legislators in Tehran this June, that “capitalism is collapsing” and that “big changes are taking place with regard to the position of the United States.”

Iran has also been reassured by Israel’s growing isolation, which it sees as part of a long-term process leading to the demise of the Jewish state, and has been emboldened by the slow but steady progress made by its own nuclear and missile programs. Thus, sensing weakness in its enemies and perceiving an opportunity, Iran’s leaders might be tempted to hasten this process of “decline” by making a move intended to humiliate the United States and highlight the limits of American power.

Iran has been irked by the U.S. role in passing four rounds of U.N. sanctions and by what it sees as a hostile American hand behind the emergence of a popular democratic opposition movement. In response to the most recent round of sanctions, Iranian Parliament Speaker Ali Larijani said that any countries that “inspect Iranian air and ship cargos” for contraband in compliance with the sanctions would be the target of “tough action against their ships in the Persian Gulf and Sea of Oman.” His warning, which was echoed by several senior military officials, might well set the stage for a naval confrontation.

Moreover, the Islamic Republic also blames the United States for the July 15 double suicide bombing of a Shiite mosque in the city of Zahedan, the latest in a series of attacks by Jundallah, a Sunni extremist group based in the southeastern province of Sistan and Baluchestan. Following the Zahedan attack, a senior Islamic Revolutionary Guard Corps (IRGC) officer, Brig. Gen. Massoud Jazayeri, warned that the United States will face unspecified “fallout” for this incident.

Iran also appears to be stepping up support for insurgent attacks against departing U.S. troops in Iraq, in order to create the impression that the United States was forced out of the country. Gen. Raymond Odierno, the senior U.S. military commander in Iraq, recently stated that Iran is arming and training three Iraqi groups — Asaib Ahl al-Haq, Moqtada al-Sadr’s Promised Day Brigade, and Kataeb Hezbollah — and he warned that Kataeb Hezbollah was planning, with the help of Iranian advisors on the ground in Iraq, to ramp up attacks on U.S. troops. Indeed, one of these groups was likely behind the rocket attack three weeks ago that killed three security guards employed by the U.S. embassy in Baghdad.

Relatively recent personnel changes in the Iranian military command structure have created additional concerns about Iranian intentions. Ahmadinejad’s new defense minister, Brig. Gen. Ahmad Vahidi, made his career in the Quds Force — the branch of the IRGC involved in terrorism and the export of the Islamic Revolution. He was personally implicated in the 1996 Khobar Towers bombing in Saudi Arabia that killed 19 U.S. servicemen, as well as other acts of terrorism. And the recently appointed commander of the IRGC navy, Vice Adm. Ali Fadavi, led IRGC naval forces in the Persian Gulf near the end of the Iran-Iraq War, when they were bloodied by the U.S. Navy. He is reputed to be a hard-liner driven by a desire to avenge this humiliation and the accidental 1988 downing of an Iranian jetliner by the U.S. military. Both were among the chorus of voices warning foreign powers not to board and search Iranian ships in accordance with recent U.N. sanctions.

While some of Iran’s leaders may well be content to continue down the country’s current path, pursuing a slow-motion nuclear breakout and stoking Arab-Israeli tensions in Gaza or Lebanon, others might welcome, for domestic political reasons, a limited conflict with the United States. This could take the form of a clash with U.S. naval forces in the Gulf or an act that prompts retaliatory U.S. airstrikes but spares Iran’s economic infrastructure and its armed forces. Iran’s leadership might hope that such a clash would divert attention from the economic hardships caused by sanctions, provide a pretext for a more severe crackdown on the domestic opposition, and rally a divided population behind an embattled and unpopular regime. For these reasons, diplomacy currently serves U.S. interests, while a limited conflict may serve the interests of some senior policymakers in the Islamic Republic.

All these factors, plus the insular nature of Iranian leadership, which sometimes seems to believe its own propaganda about U.S. decline and growing Iranian strength, could cause Iran to miscalculate or overreach, perhaps by sponsoring an act of terrorism, provoking U.S. forces in the Persian Gulf — as Iranian small boats have done in the past — or ramping up support for insurgent groups in Iraq and Afghanistan.

The United States should respond to this heightened potential for conflict by putting Tehran on notice that it is prepared for these eventualities, by quietly sending unambiguous signals to Iran through diplomatic and military channels and the media. This should give Tehran reason for pause, because a covert attack against an alert enemy is less likely to succeed and more likely to be traced to its source. Indeed, Odierno’s recent warnings that Iranian-sponsored groups were planning attacks in Iraq are a good first step in this regard.

The United States should also indicate that it is prepared to respond firmly to future Iranian provocations. Washington’s ability to deter aggressive Iranian actions is undermined by a track record of not responding, or responding tentatively, to past Iranian-sponsored terrorist attacks, such as the 1983 Marine barracks bombing in Lebanon and the 1996 Khobar Towers bombing. The United States has also eschewed responding to Iranian provocations, such as mock attacks and simulated mining of the Persian Gulf. In the past, restraint may have had the merit of avoiding further escalation. However, given the current mindset of key leaders in Tehran, restraint is likely to be interpreted as weakness — and will only embolden and strengthen hard-liners, begetting further challenges.

Washington should also inform Tehran that it will not necessarily respond in a symmetrical or proportionate manner to Iranian provocations, as it did when trying to contain a recalcitrant Iraq during the 1990s. For instance, a terrorist attack will not necessarily prompt limited strikes that are restricted to terrorist training camps, and provocations at sea may not jeopardize only the boats that participated in these activities. This should cause hawkish leaders in Tehran to question whether they can effectively manage the risk associated with a confrontation, thereby strengthening U.S. deterrence vis-à-vis Iran.

Finally, it is important to understand how events elsewhere in the world will be read in Tehran. For instance, Iran will be watching how the United States handles the ongoing crisis caused by the recent sinking of a South Korean corvette — apparently by a North Korean submarine. Continued tensions on the Korean Peninsula could create an impression in Tehran that the U.S. military is stretched too thin to respond effectively to a crisis in the Gulf, while a failure to maintain pressure on North Korea might convince Iran that it has room to engage in brinkmanship with the United States.

In light of these concerns and the high stakes involved, it would be prudent to take precautionary measures to avert a confrontation with Tehran that could provide a pretext for a crackdown on Iran’s democratic opposition, further complicate ongoing nuclear diplomacy, and perhaps lead to further escalation.

President Barack Obama came into office committed to reducing tensions with Iran and transforming the troubled relationship between the two countries by offering an outstretched hand and an open dialogue with that country’s leaders. These are, of course, laudable goals that remain on the table. Ironically, however, if diplomacy is to still have a chance and he is to achieve these goals, Obama will also have to convince Tehran that his outstretched hand can be formed into a fist. While continuing to pursue dialogue, Washington must act cautiously yet firmly with the Islamic Republic to succeed in managing tensions today and avoiding a larger confrontation in the future.

Moscow does not rule out new Iran sanctions: official

AFP: Russia does not ruling out backing fresh sanctions...