New York Post: Some 3,400 innocent Iranian dissidents now living in a camp in Iraq are in imminent danger of being slaughtered. These men, women and children — members of Mujahedin-e Khalq, or People’s Mujahedin, a longtime Iranian opposition movement — trusted America’s promise to protect them. But the gradual US withdrawal from Iraq leaves that promise in doubt. 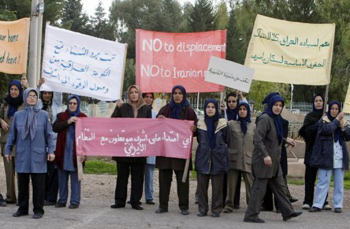 Some 3,400 innocent Iranian dissidents now living in a camp in Iraq are in imminent danger of being slaughtered. These men, women and children — members of Mujahedin-e Khalq, or People’s Mujahedin, a longtime Iranian opposition movement — trusted America’s promise to protect them. But the gradual US withdrawal from Iraq leaves that promise in doubt.

As a former base commander of Camp Ashraf, the official name of the MEK’s besieged refuge, I’d like to make one thing clear: Despite charges that the MEK is a terrorist organization, these people are American allies. It would be foolish, as well as wrong, to abandon them.

As America pulls back, Iranian influence is on the rise in Iraq — notably in Diyala Province, where Camp Ashraf is located. As Iraqi Prime Minister Nouri al-Maliki and Iran’s President Mahomoud Ahmadinejad grow closer, the MEK’s situation becomes more critical.

These innocents’ vulnerability was made tragically clear on April 8, when elements of the Iraqi army used US-supplied vehicles and equipment to raid the camp, killing 34 defenseless people and wounding nearly 350.

In videos of the event, we witness the courage of the residents of Ashraf. Despite knowing they may be the next to die, they rush to rescue their fallen comrades.

Courage under fire is an admirable trait. Killing unarmed people is murder. Yet the State Department has done nothing of substance to address these attacks or the overall Ashraf situation.

Sadly, the State Department even now continues to list the MEK as a terrorist group — a listing made 14 years ago to placate the rulers in Tehran in yet another failed diplomatic outreach. (A court has now ordered State to review the listing.)

As the former antiterrorism/force protection officer for all of Iraq, I know the “factual” basis for the listing is false. For example, Hoshyar Zebari, now Iraq’s foreign minister and the longtime head of international relations for the Kurdistan Democrat Party International Relations, has repeatedly confirmed that the MEK did not attack the Kurds in the 1990s. Yet State still cites such supposed attacks in its annual report on terrorism. And just last month, State’s point man on Ashraf, Ambassador Lawrence Butler, repeated the canard again in a New York Times interview.

The real benefactors of the fall of the MEK will be Ahmadinejad and the Iranian regime — which has long sought custody of these refugees in order to eliminate them as enemies of the state.

The MEK surrendered to the US military without firing a shot, turned over all its weapons, accepted consolidation at Camp Ashraf, formally renounced terrorism, accepted protected-person status under the Fourth Geneva Convention and provided the Free world with crucial intelligence, including vital data on Iran’s development of a nuclear weapons program. They met every requirement we placed on them.

Yet in early 2009, we turned the protection of Ashraf over to the Iraqis — despite numerous warnings that too many elements of Iraq’s government are eager to curry favor with Iran. This is like putting the Mafia in charge of the FBI Witness Protection Program.

As validated in the April 8 videos, the “protectors” murdered Ashraf residents. Now, the United States wants Ashraf residents to accept relocation to a different, more remote site in Iraq. The refugees see this as an invitation to a massacre — not unlike the 1995 slaughter of Bosnian Muslims in Srebrenica.

The MEK has fulfilled its end of commitments. The United States has come up very short, and the residents of Camp Ashraf are paying the price. It is long past time for us to make things right.

For starters, that means removing the MEK from the US terrorist list and moving Ashraf residents to third countries where their safety can be guaranteed.

Col. Wesley Martin US Army (Ret.), served as the senior antiterrorism/force-protection officer for all Coalition forces in Iraq during Operation Iraqi Freedom.