I won’t let Iran get nukes

Wall Street Journal – By Mitt Romney: The International Atomic Energy Agency’s latest report this week makes clear what I and others have been warning about for too long: Iran is making rapid headway toward its goal of obtaining nuclear weapons.

Barack Obama is leading us toward a cascade of proliferation in the Middle East. 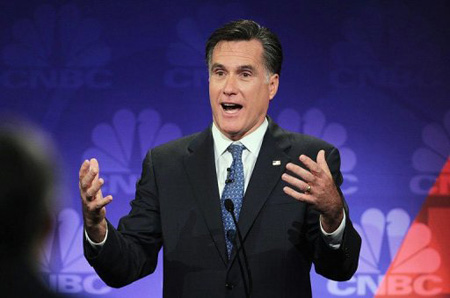 The International Atomic Energy Agency’s latest report this week makes clear what I and others have been warning about for too long: Iran is making rapid headway toward its goal of obtaining nuclear weapons.

Successive American presidents, including Barack Obama, have declared such an outcome to be unacceptable. But under the Obama administration, rhetoric and policy have been sharply at odds, and we’re hurtling toward a major crisis involving nuclear weapons in one of the most politically volatile and economically significant regions of the world.

Things did not have to be this way. To understand how best to proceed from here, we need to review the administration’s extraordinary record of failure.

As a candidate for the presidency in 2007, Barack Obama put forward “engagement” with Tehran as a way to solve the nuclear problem, declaring he would meet with Iran’s leaders “without preconditions.” Whether this approach was rooted in naïveté or in realistic expectations can be debated; I believe it was the former. But whatever calculation lay behind the proposed diplomatic opening, it was predictably rebuffed by the Iranian regime.

After that repudiation, a serious U.S. strategy to block Iran’s nuclear ambitions became an urgent necessity. But that is precisely what the administration never provided. Instead, we’ve been offered a case study in botched diplomacy and its potentially horrific costs.

In his “reset” of relations with Russia, President Obama caved in to Moscow’s demands by reneging on a missile-defense agreement with Eastern European allies and agreeing to a New Start Treaty to reduce strategic nuclear weapons while getting virtually nothing in return. If there ever was a possibility of gaining the Kremlin’s support for tougher action against Tehran, that unilateral giveaway was the moment. President Obama foreclosed it.

Another key juncture came with the emergence of Iran’s Green Revolution after the stolen election of 2009. Here—more than a year before the eruption of the Arab Spring—was a spontaneous popular revolt against a regime that has been destabilizing the region, supporting terrorism around the world, killing American soldiers in Iraq, and attacking the U.S. for three decades. Yet President Obama, evidently fearful of jeopardizing any further hope of engagement, proclaimed his intention not to “meddle” as the ayatollahs unleashed a wave of terror against their own society. A proper American policy might or might not have altered the outcome; we will never know. But thanks to this shameful abdication of moral authority, any hope of toppling a vicious regime was lost, perhaps for generations.

In 2010, the administration did finally impose another round of sanctions, which President Obama hailed as a strike “at the heart” of Iran’s ability to fund its nuclear programs. But here again we can see a gulf between words and deeds. As the IAEA report makes plain, the heart that we supposedly struck is still pumping just fine. Sanctions clearly failed in their purpose. Iran is on the threshold of becoming a nuclear power.

Recent events have brought White House fecklessness to another low. When Iran was discovered plotting to kill Saudi Arabia’s ambassador by setting off a bomb in downtown Washington, the administration responded with nothing more than tough talk and an indictment against two low-level Iranian operatives, as if this were merely a common criminal offense rather than an act of international aggression. Demonstrating further irresolution, the administration then floated the idea of sanctioning Iran’s central bank, only to quietly withdraw that proposal.

Barack Obama has shredded his own credibility on Iran, conveyed an image of American weakness, and increased the prospect of a cascade of nuclear proliferation in the unstable Middle East.

Si vis pacem, para bellum. That is a Latin phrase, but the ayatollahs will have no trouble understanding its meaning from a Romney administration: If you want peace, prepare for war.

I want peace. And if I am president, I will begin by imposing a new round of far tougher economic sanctions on Iran. I will do this together with the world if we can, unilaterally if we must. I will speak out forcefully on behalf of Iranian dissidents. I will back up American diplomacy with a very real and very credible military option. I will restore the regular presence of aircraft carrier groups in the Mediterranean and the Persian Gulf region simultaneously. I will increase military assistance to Israel and coordination with all of our allies in the region. These actions will send an unequivocal signal to Iran that the United States, acting in concert with allies, will never permit Iran to obtain nuclear weapons.

Only when the ayatollahs no longer have doubts about America’s resolve will they abandon their nuclear ambitions.

Mr. Romney, the former governor of Massachusetts, is seeking the Republican presidential nomination.