US defense chief cautions against strike on Iran

AFP: US Defense Secretary Leon Panetta on Thursday warned of the risks from any military strike on Iran, saying it could have a “serious impact” on the region without halting Tehran’s nuclear program. 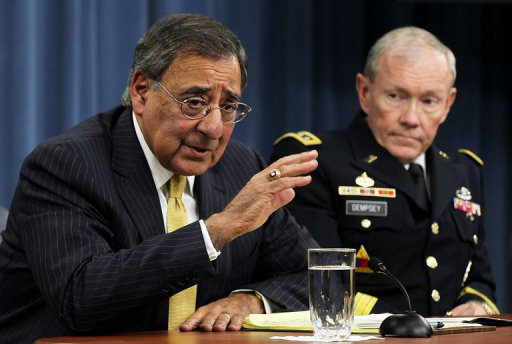 WASHINGTON (AFP) — US Defense Secretary Leon Panetta on Thursday warned of the risks from any military strike on Iran, saying it could have a “serious impact” on the region without halting Tehran’s nuclear program.

“You’ve got to be careful of unintended consequences here,” he told reporters.

The Pentagon chief said he agreed with the view of his predecessor, former defense secretary Robert Gates, that bombing Iran would only delay the nuclear project by about three years.

Panetta said the United States was focused on diplomacy and was holding talks with allies to impose “additional sanctions” on Iran over its nuclear work. A strike on Iran ought to be “a last resort,” he said.

Panetta’s comments coincided with rising tensions with Iran after a UN report cited proof that Tehran’s atomic program was being used to develop nuclear warheads.

Israel has signaled it may stage air strikes against Iran’s nuclear sites while Tehran on Thursday threatened to hit back against any attack or even the threat of military action.

Asked if the United States could tolerate a nuclear-armed Iran if sanctions fail, Panetta said he hoped it would not come to that.

He said that “it is important that the world come together to apply sanctions against Iran and make very clear to them that they are going to pay a heavy price if they continue along this track.

“As to what happens down the road, you know, I think our hope is that we don’t reach that point and that Iran decides that it should join the international family.”

Iran’s supreme leader, Ayatollah Ali Khamenei, meanwhile said the country “will respond with full force to any aggression or even threats in a way that will demolish the aggressors from within.”

He said the message was directed at Iran’s enemies, “especially America and its stooges and the Zionist regime (Israel).”

The supreme leader’s forceful language followed threats last week from Israel that air strikes could be in the offing against Iran’s nuclear facilities.