How Iran could get the bomb overnight 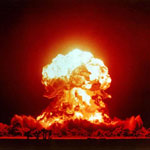 Wall Street Journal: The West has tried to stop Iran from manufacturing nuclear weapons by diplomacy, sanctions and cybersabotage, and with the threat of military action if Tehran crosses red lines in moving toward the final stages of making a bomb. The Wall Street Journal

The West has tried to stop Iran from manufacturing nuclear weapons by diplomacy, sanctions and cybersabotage, and with the threat of military action if Tehran crosses red lines in moving toward the final stages of making a bomb. If Iran becomes discouraged in its efforts, an easier and more immediately dangerous option is available: buying nuclear weapons from North Korea.

When it comes to manufacturing weapons of mass destruction, the Iranian regime is in a bind. To further enrich its current stockpile of lowly-enriched uranium hexafluoride gas to weapons-grade material, Tehran would need to reconfigure its centrifuges. Since those centrifuges are closely monitored by inspectors of the International Atomic Energy Agency, Iran would have to expel the inspectors, explicitly breaking out of the Non-Proliferation Treaty.

Then it would take four to six months—according to the head of Tel Aviv University’s Institute for National Studies, Amos Yadlin—to produce enough enriched uranium for a bomb. During this interval, Tehran would effectively invite an attack by the U.S. and Israel, which have repeatedly stated that they will not allow Iran to produce fissile fuel for weapons. Since the U.S. has munitions capable of destroying all of Iran’s centrifuges above ground at Natanz and sealing off the entrances to its underground facilities at Fordo—plus the Stealth bombers to deliver these knockout punches—Iran would likely lose the means to manufacture nuclear weapons before it could make a single one.

But what if Iran buys one or two nuclear warheads from North Korea? The government in Pyongyang has already conducted three nuclear tests and claims that it has nuclear warheads that fit on its No Dong medium-range ballistic missiles. If that claim is true, then mounting the warheads on Iran’s Shahab missiles, which are copies of the North Korean ones, would present little problem. After all, Iran has collaborated with North Korea on missile design for more than a decade.

These off-the-shelf weapons would leave virtually no window of opportunity for a pre-emptive attack by the West and its allies. The warheads could arrive in Iran on a plane in the middle of the night and be immediately fitted onto Iranian missiles. Iran would not have to actually use these missiles to have a deterrent. It could renounce the Non-Proliferation Treaty and flaunt its nukes, as North Korea has done for seven years without suffering a military attack by the U.S. Indeed, such a fait accompli would give Iran the same potential for nuclear retaliation as North Korea.

Do we know for sure that North Korea has nuclear warheads it could transfer to Iran? There is little doubt that the country has the means to produce between three and six nuclear bombs annually. In 2011, North Korea invited a former director of the Los Alamos National Laboratory, Siegfried Hecker, to inspect a state-of-the-art uranium-enrichment plant at Yongbyon, with just such a capability. According to a Feb. 13 report by the Congressional Research Service, U.S. intelligence believes that, in North Korea, “it is likely other, clandestine enrichment facilities exist” to produce fissile material for bombs.

North Korea has already demonstrated its willingness to engage in illicit nuclear proliferation by selling a nuclear reactor to Syria (the reactor was destroyed by Israeli bombers in 2007.) We also know that Pyongyang desperately needs money and that, even with sanctions, Iran has billions in oil revenue. If the price is right, then, the North Koreans have every reason to make a deal.

One ominous sign that such a deal may be in progress came in February reports by the Sunday Times of London and the Times of Israel that the Iranian physicist Mohsen Fakhrizadeh was in North Korea when it conducted its third nuclear test last month. Mr. Fakhrizadeh, one of the architects of Iran’s nuclear program, reportedly headed Iran’s secret “project 111,” which, according to the 2007 CIA National Intelligence Estimate, worked to design warheads that could be used on Iranian missiles. If he indeed observed the test last month, it would not have been as a tourist.

By focusing on preventing Iran from manufacturing a nuke and relying on time to plan a pre-emptive strike, the U.S. may be neglecting Iran’s far more dangerous option of buying the bomb. Stopping the delivery of a warheads shipment would not be easy. Not being ready to stop it could prove catastrophic.

Mr. Epstein’s most recent book is “The Annals of Unsolved Crime” published this month by Melville House.

Reuters: Cyprus will let the United Nations decide whether...