AP: During a celebration last week to mark the Persian new year, President Mahmoud Ahmadinejad did something quietly remarkable: He stood modestly to the side and let his favored aide have the spotlight. The Associated Press

By By ALI AKBAR DAREINI and BRIAN MURPHY 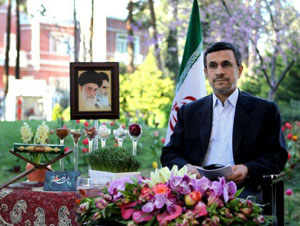 TEHRAN, Iran (AP) — During a celebration last week to mark the Persian new year, President Mahmoud Ahmadinejad did something quietly remarkable: He stood modestly to the side and let his favored aide have the spotlight.

The gesture was far more than just a rare demure moment from the normally grandstanding leader. It was more carefully scripted stagecraft in Ahmadinejad’s longshot efforts to promote the political fortunes of his chief of staff — and in-law — and seek a place for him on the June presidential ballot that will pick Iran’s next president.

In the waning months of Ahmadinejad’s presidency — weakened by years of internal battles with the ruling clerics — there appears no bigger priority than attempting one last surprise. It’s built around rehabilitating the image of Esfandiari Rahim Mashaei and somehow getting him a place among the candidates for the June 14 vote.

To pull it off, Ahmadinejad must do what has eluded him so far: Come out on top in a showdown with Supreme Leader Ayatollah Ali Khamenei and the other guardians of the Islamic Republic. Ahmadinejad has been slapped down hard after bold — but ultimately doomed — attempts in recent years to push the influence of his office on policies and decisions reserved for the ruling clerics.

That has left him limping into the end of his eight-year presidency with many allies either jailed or pushed to the political margins. Mashaei is part of the collateral damage.

He’s been discredited as part of a “deviant current” that critics say seeks to undermine Islamic rule in Iran and elevate the values of pre-Islamic Persia. The smear campaign has even included rumors that Mashaei conjured black magic spells to cloud Ahmadinejad’s judgment.

The prevailing wisdom is that the backlash has effectively killed Mashaei’s chances for the presidential ballot. The ruling clerics vet all candidates and, the theory follows, they seek a predictable slate of loyalists after dealing with Ahmadinejad’s ambitions and disruptive power plays. In short: Friends of Ahmadinejad need not apply.

Khamenei and others, including the powerful Revolutionary Guard, also are hoping to quell domestic political spats that they fear project a sense of instability during critical negotiations with the West over Tehran’s nuclear program.

Yet none of this seems to have discouraged Ahmadinejad, whose son is married to Mashaei’s daughter. Ahmadinejad has been trying to groom Mashaei for years as his potential heir and now appears reluctant to toss his backing behind a less controversial figure.

To that end, the president has hit the road as a cheerleader for Mashaei under the slogan “Long Live Spring.”

At one stop, Ahmadinejad described Mashaei as “a pious man.” At another event he called him “excellent, wise,” and at a third said his adviser has “a heart like a mirror.”

At last week’s event, both men burst into tears as they discussed the need to help children with cancer. Ahmadinejad then “thanked God for having the opportunity to get to know Mashaei.”

Ahmadinejad appears to be banking on his populist appeal to force the Guardian Council — the gatekeepers for the candidates — to consider Mashaei too prominent to reject.

“Ahmadinejad doesn’t want to go out with a whimper. That’s not his style,” said Mustafa Alani, an analyst at the Gulf Research Center based in Geneva. “He wants his legacy, his man, as his successor.”

Tehran-based political analyst Sadeq Zibakalam also sees Mashaei as Ahmadinejad’s last-ditch insurance policy. Without an ally as successor, Ahmadinejad fears he will be cast to the political sidelines.

“Ahmadinejad has no option but to get one of his loyalists into power,” he said.

It will be more than a month before the candidate list is finalized. The presidential hopefuls will register from May 7-11, the semiofficial Fars news agency reported Monday.

Already, however, the general contours are taking shape.

There is Ahmadinejad’s quest for Mashaei as the only active campaign roadshow.

Many conservatives, meanwhile, seem to be coalescing around a three-way alliance — all apparently in the good graces of the ruling system — of former Foreign Minister and current Khamenei adviser Ali Akbar Velayati; Tehran Mayor Mohammad Bagher Qalibaf and prominent lawmaker Gholam Ali Haddad Adel, whose daughter is married to Khamenei’s son.

“Should we win, our coalition will form the backbone of the future government,” Velayati told a press conference earlier this month, suggesting that the potential winner would seek key posts for the other two.

A separate roster of establishment-friendly candidates is getting bigger by the day. It includes former Intelligence Minister Ali Fallahian; parliament’s vice speaker, Mohammad Reza Bahonar, and a former Revolutionary Guard commander, Mohsen Rezaei, who ran against Ahmadinejad in his disputed re-election in 2009.

Reformists remain undecided whether to fall behind a potential candidate or boycott the vote in protest of the 2009 outcome — which they claim stole the election from Green Movement leader Mir Hossein Mousavi — and the crushing pressures on dissent that followed. Mousavi and fellow reformist candidate Mahdi Karroubi have been under house arrest for more than two years.

But the most unpredictable element is still Ahmadinejad’s push for Mashaei, whom he bills as his ideological heir and supporter of populist initiatives such as government stipends to poor families.

“Ahmadinejad will travel city to city and tell the public that they should vote for me if they want Ahmadinejad’s plans to be pursued,” Mashaei was quoted as saying by Iranian media.

The president — the same man who calls for the destruction of Iran’s enemies — is often musing and sentimental as Mashaei’s pitchman.

“I testify that this man loves all human beings,” Ahmadinejad said of his in-law.

Mashaei, however, has been a political lightning rod for years. In 2009, Ahmadinejad appointed him as his first vice president, but was forced to backtrack on orders from Khamenei.

Mashaei is believed to have been Ahmadinejad’s adviser in a stunning feud with Khamenei over the choice of intelligence chief in 2011. The president boycotted Cabinet meetings for 11 days — an unprecedented show of disrespect to Iran’s supreme leader — but finally backed down.

In December, Ahmadinejad named Mashaei to a top post in the Nonaligned Movement, a Cold War holdover that Iran seeks to revive as a counterweight to Western influence. The appointment was seen as an attempt to raise Mashaei’s political profile and give him some international experience.

While it’s not possible to rule out any candidate until the vetting process is complete, one conservative cleric gives Mashaei no chance.

The Independent: It's the Iranian New Year and people...