Britain’s part in the UN’s disgraceful act of betrayal

Sunday Telegraph: Last week, before the UN Security Council in New York, there unfolded the latest bizarre chapter in one of the most extraordinary stories I have ever followed in this column. Testifying to the council was Martin Kobler, who has just retired after two years as the special representative of the UN’s Secretary-General, Ban Ki-moon, in Iraq. 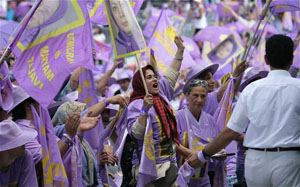 Last week, before the UN Security Council in New York, there unfolded the latest bizarre chapter in one of the most extraordinary stories I have ever followed in this column. Testifying to the council was Martin Kobler, who has just retired after two years as the special representative of the UN’s Secretary-General, Ban Ki-moon, in Iraq. But Mr Kobler stands accused of having colluded with the Iranian regime in a conspiracy to betray thousands of defenceless Iranian dissidents, who for years have been living in exile in Iraq, allowing scores of them to be murdered and leaving many hundreds injured.

The dissidents belonging to the People’s Mujahideen of Iran (PMOI), are part of the largest Iranian opposition group, the National Council of Resistance of Iran (NCRI), which has long been working for the replacement of the country’s ruthless religious dictatorship, under the Supreme Leader, the Ayatollah Khamenei, by a modern democracy. The Tehran regime looks on the NCRI as its most hated enemy, and none of its members have become more vulnerable than the 3,400 men and women who, from the early 1980s onwards, lived as exiles in a neat little town they built in the Iraqi desert, known as Camp Ashraf.

No sooner had the last US military forces left Iraq in 2009 than Tehran’s prime objective, with the full co-operation of the Iraqi prime minister Nouri al-Maliki, was to eliminate those exiles who, in 2003, had each been given personal guarantees of their safety signed by a US general. First Camp Ashraf was subjected to murderous attacks by Iraqi troops acting with Iran’s notorious Quds forces. Then in 2011, they were tricked by Mr Kobler, acting as the UN’s special representative, into moving into a former US military base, ironically named “Camp Liberty”, which turned out to be no more than a hellish prison. Guarded night and day by armed thugs, without water or electricity, robbed of their belongings, they were subjected three more times to heavy mortar attacks – one only last month, leaving scores more dead and injured. All this was made possible, apparently, by Mr Kobler, one of whose senior aides was so outraged by the deceit involved that he last year resigned, giving chilling testimony to both the US Congress and the European Parliament.

What makes this story even more remarkable is the astonishing array of supporters the two sides have managed to recruit. Last month the head of the NCRI, Maryam Rajavi, was able to stage a vast rally in Paris attended not just by 100,000 Iranian exiles, but by an impressive array of political figures from 47 countries across the world, ranging from New York’s former mayor Rudy Giuliani to senior office-holders in the European Parliament – along with a galaxy of former top US officials, generals and lawyers.

Most disconcerting of all has been the part played in all this not just by the UN itself but also by the US State Department and our Foreign Office which, in defiance of the evidence, has continued to give Mr Kobler unquestioning support for all he has contributed to this shameful story.

When he appeared before the UN Security Council last Tuesday, his sanitised account of his record in Iraq was promptly condemned by Mrs Rajavi – backed by an abundance of documentary evidence – as no more than “ludicrous fabrications”, a wholesale betrayal of human rights, and “a stain on the record of the United Nations”. She warned that all the signs are that another murderous assault on Camp Liberty will not be long in coming. But what we in Britain should find most shocking of all is that our own government is still, in our name, prepared to give its full backing to what has been arguably the most disgraceful act of betrayal the United Nations has ever put its hand to.

Reuters: Iran threatened the United States on Sunday with...

AFP: Iran has shown again it intends to press...