Reuters: The civil war in Syria is widening a rift between top Shi’ite Muslim clergy in Iraq and Iran who have taken opposing stands on whether or not to send followers into combat on President Bashar al-Assad’s side. By Suadad al-Salhy 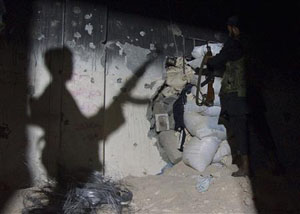 NAJAF, Iraq (Reuters) – The civil war in Syria is widening a rift between top Shi’ite Muslim clergy in Iraq and Iran who have taken opposing stands on whether or not to send followers into combat on President Bashar al-Assad’s side.

Competition for leadership of the Shi’ite community has intensified since the U.S.-led invasion of 2003 toppled Saddam Hussein, empowering majority Shi’ites through the ballot box and restoring the Iraqi holy city of Najaf to prominence.

In Iran’s holy city of Qom, senior Shi’ite clerics, or Marjiiya, have issued fatwas (edicts) enjoining their followers to fight in Syria, where mainly Sunni rebels are fighting to overthrow Assad, whose Alawite sect derives from Shi’ite Islam.

Shi’ite militant leaders fighting in Syria and those in charge of recruitment in Iraq say the number of volunteers has increased significantly since the fatwas were pronounced.

Tehran, Assad’s staunchest defender in the region, has drawn on other Shi’ite allies, including Lebanese militia Hezbollah.

Hezbollah’s open intervention earlier this year hardened the sectarian tone of a conflict that grew out of a peaceful street uprising against four decades of Assad family rule, and shifted the battlefield tide in the Syrian government’s favor.

The Syrian war has polarized Sunnis and Shi’ites across the Middle East – but has also spotlighted divisions within each of Islam’s two main denominations, putting Qom and Najaf at odds and complicating intra-Shi’ite relations in Iraq.

In Najaf, Grand Ayatollah Ali al-Sistani, who commands unswerving loyalty from most Iraqi Shi’ites and many more worldwide, has refused to sanction fighting in a war he views as political rather than religious.

Despite Sistani’s stance, some of Iraq’s most influential Shi’ite political parties and militia, who swear allegiance to Iranian Supreme Leader Ayatollah Ali Khamenei, have answered his call to arms and sent their disciples into battle in Syria.

“Those who went to fight in Syria are disobedient,” said a senior Shi’ite cleric who runs the office of one of the top four Marjiya in Najaf.

The split is rooted in a fundamental difference of opinion over the nature and scope of clerical authority.

Najaf Marjiiya see the role of the cleric in public affairs as limited, whereas in Iran, the cleric is the Supreme Leader and holds ultimate spiritual and political authority in the “Velayet e-Faqih” system (“guardianship of the jurist”).

“The tension between the two Marjiiya already existed a long time ago, but now it has an impact on the Iraqi position towards the Syria crisis,” a senior Shi’ite cleric with links to Marjiiya in Najaf said on condition of anonymity.

“If both Marjiiya had a unified position (toward Syria), we would witness a position of (Iraqi) government support for the Syrian regime”.

The Shi’ite-led government in Baghdad says it takes no sides in the civil war, but the flow of Iraqi militiamen across the border into Syria has compromised that official position.

Khamenei and his faithful in Iraq and Iran regard Syria as a important link in a “Shi’ite Crescent” stretching from Tehran to Beirut through Baghdad and Damascus, according to senior clerics and politicians.

Answering a question posted on his website by one of his followers regarding the legitimacy of fighting in Syria, senior Iraq Shi’ite cleric Kadhim al-Haeari, who is based in Iran, described fighting in Syria as a “duty” to defend Islam.

Militants say that around 50 Iraqi Shi’ites fly to Damascus every week to fight, often alongside Assad’s troops, or to protect the Sayyida Zeinab shrine on the outskirts of the capital, an especially sacred place for Shi’ites.

“I am following my Marjiiya. My spiritual leader has said fighting in Syria is a legitimate duty. I do not pay attention to what others say,” said Ali, a former Mehdi army militant who was packing his bag to travel from Iraq to Syria.

“No one has the right to stop me. I am defending my religion, my Imam’s daughter Sayyida Zeinab’s shrine.”

A high-ranking Shi’ite cleric who runs the office of one of the four top Marjiiya in Najaf said the protection of Shi’ite shrines in Syria was used as a pretext by Iran to galvanize Shi’ites into action.

In the 10 years since Saddam’s fall, Iran’s influence in Iraq has grown and it has sought to gain a foothold in Najaf in particular.

Senior Iranian clerics have opened offices in Najaf, as well as non-governmental organizations, charities and cultural institutions, most of which are funded directly by Marjiiya in Iran, or the Iranian Embassy in Baghdad, local officials said.

The Iranian flag flies over a two-storey building in an upscale neighborhood of Najaf, which houses the “Imam Khomeini Institution”, named after the Islamic Republic’s founder, Ayatollah Ruhollah Khomeini.

The Imam Khomeini Institution is one of many Iranian entities that have engaged in social activities in Iraq, focusing on young men, helping them get married, and paying regular stipends to widows, orphans and students of religion.

Some institutions also support young clerics and fund free trips for university students to visit Shi’ite shrines in Iran, including a formal visit to Khamenei’s office in Tehran, Shi’ite politicians with knowledge of the activities say.

“We have a big project in Iraq aimed at spreading the principles of Velayet e-Faqih and the young are our target,” a high-ranking Shi’ite leader who works under Khamenei’s auspices said on condition of anonymity.

“We are not looking to establish an Islamic State in Iraq, but at least we want to create revolutionary entities that would be ready to fight to save the Shi’ite project”.

Bloomberg: Venezuela will resume gasoline shipments to Iran after...