US-UN: Kill the messenger not the dictator!

Scoop: You would think this story would appeal to the media: 52 unarmed people shot dead, six women and a man taken hostage and hidden away. So why have the media hardly mentioned it at all? Because the Foreign and Commonwealth Office won’t let them publish it? If so, why won’t it? 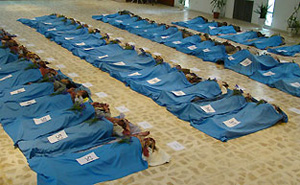 You would think this story would appeal to the media: 52 unarmed people shot dead, six women and a man taken hostage and hidden away. So why have the media hardly mentioned it at all? Because the Foreign and Commonwealth Office won’t let them publish it? If so, why won’t it?

To prove its wholehearted intentions to save its members the Iranian resistance leader Maryam Rajavi pledged 100 million dollars to the trust fund set up at initiative of UN Secretary-General for transfer of PMOI members to other countries from sale of Ashraf property.

I have been pondering the answer to these questions ever since the atrocity happened, nearly two months ago. Not for the first time: there have been five previous attacks, of which four resulted in deaths and injuries, and every time it was hushed up. Every time, governments and the United Nations have uttered “strong condemnations”. Every time, they have asked the Government of Iraq, where the victims had been living, to investigate. It never has. Shouldn’t it be evident by now that those “strong condemnations” are no more use than (say) reciting the alphabet ?

According to the Government of Iraq, the survivors of the slaughter are obstructing the investigation, if so, why doesn’t someone else (the UN, for instance) conduct one? If what really happened is uncertain, let’s find out.

The real problem is not too little certainty, but too much.

The Government of Iraq doesn’t want a real investigation because, just as on all the previous occasions, it would show who was really guilty: they were.

Consider the victims’ history: they had to leave their native Iran because they had been threatened with death for opposing the regime which runs it, and whose human rights record I recently saw described as “spotty”. This is the country which, according to Amnesty International, executes a higher proportion of its population than anywhere else in the world, and which, to quote just one example of its so-called “moderate” new president’s policies, has just passed a law allowing men to marry their adopted thirteen-year-old daughters. If that’s a spotty record, what would a bad one look like?

The members of the banned PMOI took refuge in Iraq and built with their own hands a city, Ashraf, where they lived for over a quarter of a century. They had weapons of self-defence, but disarmed in 2003, in exchange for written guarantees of safety from the United States Government. On 1 September, at least one victim was shot dead with that paper in her hand.

In 2009, the US handed over responsibility to Ashraf to the Government of Iraq, whose Prime Minister, Nouri Al-Maliki, owes his job to Iran.

Almost at once the Ashrafis began suffering from harassment and, in July 2009, the first so-called “clash”, a euphemism for murder. Eleven people died, hundreds were injured. In April 2011, thirty-six died and hundreds were injured. If the survivors had not agreed to move to a “temporary transit location” with the unsuitable name of Camp Liberty, they might all have been killed. As it was, they found themselves in living conditions which can fairly be compared to those in a concentration camp, and about which the UN deliberately lied. This year came three attacks on Liberty, twelve more deaths, hundreds more injuries. The Iranian mullahs have said in so many words that there will be another. Again, the conclusion should be obvious: this won’t stop until the last of those 3,000 Iranians is dead.

Whatever really happened on 1 September, what the Iraqis say can’t be true, because it contradicts itself. At first, they tried to pass off what the UN calls the “unfortunate incident” as a gas explosion, until the survivors’ pictures and videos of gunshot wounds went viral. Meanwhile, the Iranian regime praised the Iraqis for exterminating its enemies, a statement which was hastily withdrawn. The Iraqis then tried to blame unnamed Iraqi civilians, supposedly taking revenge for attacks on their families by the PMOI. They don’t say how these people could have entered a camp so heavily guarded that, according to the UN’s former chief of human rights in Iraq (who has now resigned in disgust), not even a fox can avoid being seen. The third theory is that the PMOI attacked the guards who fired in self-defense, which means that unarmed civilians provoked soldiers armed to the teeth: how likely is that ? The fourth is that the deaths resulted from “an internal dispute”. If so, how did they manage to shoot one another without any guns? This would only be possible if they had hidden weapons, a suggestion frequently made on the pro-mullah websites. Top-ranking officers of the US Army have repeatedly stated (when the PMOI was removed from the US list of terrorist organizations, they did so on oath) that they had no weapons at all.

It should be clear that the US, the UK, the EU and the UN will clutch at any straw to avoid admitting how shameful their record is, let alone admitting their responsibility for bringing Al-Maliki to power in the first place. My final question: are we going to let them get away with it?

And the hostages? The Iraqis are pretending they don’t know where they are. Since Ashraf is empty and they are not in Liberty, where can they be, especially as both camps are surrounded with desert? Where except Iraqi prisons (in the plural, because they keep being moved so as to lessen the chance of anyone finding them). Their ultimate destination is Iran, where they are under sentence of death.

Carolyn Beckingham is a freelance writer and long-time supporter of the Iranian Resistance fighting to bring justice back to Iran.

New York Times: Iran has continued its crackdown on...