Reuters: An Argentine prosecutor has asked a judge to declare as unconstitutional an agreement between Argentina and Iran to jointly investigate the deadly 1994 bombing of a Buenos Aires Jewish community center that local courts blamed on Tehran. 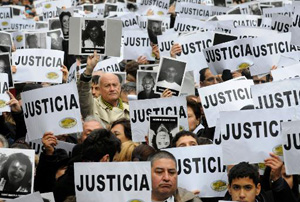 BUENOS AIRES (Reuters) – An Argentine prosecutor has asked a judge to declare as unconstitutional an agreement between Argentina and Iran to jointly investigate the deadly 1994 bombing of a Buenos Aires Jewish community center that local courts blamed on Tehran.

Alberto Nisman, who oversaw an investigation of the AMIA center explosion that killed 85 people, presented the appeal to a federal judge on Wednesday, according to a document seen by Reuters.

Israel and world Jewish groups denounced the agreement under which Argentina and Iran formed a “truth commission” in January, saying it was a diplomatic win for Tehran, while offering no benefit to Argentina.

The agreement outlines plans for five Argentine officials who are not residents of Argentina or Iran to interview suspects in Iran. Nisman’s appeal said the probe could result in sanctions for Argentina from international human rights bodies.

The commission violates rights protected by Argentina’s constitution including judicial independence, the guarantee of due process, the right to effective judicial protection and the right to justice for victims, his motion said.

The bombing came two years after a group linked to Iran and the Lebanese militant group Hezbollah claimed responsibility for a bomb attack on the Israeli embassy in the Argentine capital, which killed 29. Tehran has denied links to either attack.

In 2007, Argentine authorities secured Interpol arrest warrants for five Iranians and a Lebanese in the bombing of the AMIA Jewish community center.

Led by the United States, the West has imposed sanctions on Iran – including targeting its key oil revenues – to force it into a diplomatic solution over its nuclear program, which Western nations believe is aimed at developing a nuclear bomb.

Argentina’s President Cristina Fernandez is allied with left-leaning leaders who have been on good terms with Tehran, such as Venezuelan President Nicolas Maduro.

Reuters: German exports to Iran will fall sharply this...