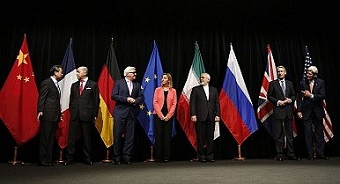 London, 28 Jul – Writing for The Diplomat on July 28, Struan Stevenson, former Member of the European Parliament and President of the European Iraqi Freedom Association (EIFA), argued that the West’s nuclear deal with Iran was in danger of collapse.

The Joint Comprehensive Plan of Action (JCPOA), now a year old, is being undermined, he said, both from Iranian behaviour and from the exposure of the limits of the agreement.

Last week, a leaked document revealed that the freeze on Iranian uranium enrichment is in fact 11, not 15, years, Mr Stevenson reported.

It is clear that inspections are limited to the Natanz site, and then only to “relevant” buildings. He pointed out that Natanz was a secret facility until the People’s Mojahedin Organization of Iran (PMOI or MEK) revealed its existence in 2002.

Mr Stevenson also noted the comments of Dr Ali Akbar Salehi, President of the Atomic Energy Organization of Iran (AEOI), who has said the nuclear deal stipulates that if any party violates it, then Iran can go back to enriching uranium at an even higher capacity than before the agreement was signed.

In addition, Mr Stevenson reported, Iran’s continuing development of ballistic missiles led, last week, to criticism from the UN Secretary General as “not consistent with the constructive spirit” of the nuclear agreement.

Finally, Iran has used the windfall from the easing of sanctions to fund terror in the region.

Painting a picture of a regime that cannot be trusted, Mr Stevenson noted Iran’s weakness and urged the West to re-think its capitulation on the nuclear deal. Sanctions did work and can work again, he argued.

U.K. warns Iran over threat to Strait of Hormuz

Bloomberg: The U.K. may take military action against Iran...