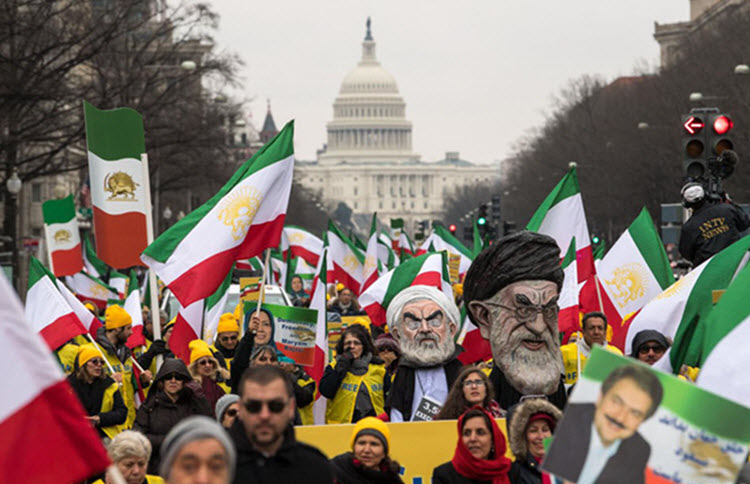 Outside view by Amir B.

On Friday, 21 June, Iranian-American communities will hold a massive rally in support of the popular protests for regime change in Iran. The rally will be held in Washington DC a week after supporters of the main opposition group People’s Mojahedin (Mujahedin-e Khalq, MEK) held a “Free Iran” rally in Brussels and were supported by many European dignitaries.

In addition to supporting Iranian people’s desire for regime change, the rally will send a strong message to the international community to change their policy on the Iranian regime and support Iranian people’s wishes for a free Iran instead of appeasement.

The ruling Iranian theocracy has set new records in violating human rights. The regime poses the greatest challenge to the international community.

Resolving this crisis is vital not just to our people but for global peace and security, the solution to this challenge is not in appeasement nor in attempts to contain or modify the regime’s bahavior, because the regime ruling Iran is a medieval theocracy that lacks the capacity to reform.

The principle of the velayat-e faqih (absolute clerical rule) is the pillar of the Iranian regime’s constitution and cannot be changed even through a referendum. It forms the basis for its laws and practices and accords little value to the people’s vote.

Maryam Rajavi, president-elect of the National Council of Resistance of Iran (NCRI), told the opposition’s 2016 annual rally in Paris: “Appeasement only emboldens the mullahs. The answer to fundamentalism is democracy.”

In 2016, Maryam Rajavi highlighted the capacity of the Iranian Resistance for achieving regime change. She said that without foreign impediments “the Iranian people and their organized Resistance have the capacity and ability to bring about change”.

Rajavi added: “The presence of an organized Resistance with 120,000 martyrs and more than half-a-million prisoners is indicative of the depth and the intensity of society’s rejection of the regime.”

By forming a pluralistic alternative, a widespread social network and a liberation army, the Resistance has sufficient power and potential to bring about change in Iran. It has led the Iranian people’s movement for democracy in the most difficult domestic and regional circumstances, Rajavi said.

The NCRI, the Iranian opposition’s parliament-in-exile, is a coalition of democratic forces that seek a republic based on separation of religion and state. Half its members are women. With the membership of religious and ethnic minorities and different political tendencies, the NCRI represents a majority of the Iranian nation and is the guarantee for Iran’s unity after the toppling of the mullahs and the peaceful transfer of power.

Global stability, peace and security requires the overthrow of Iran’s terrorist regime. This is a duty solely on the shoulders of the Iranian people and their organized opposition, the NCRI and MEK. Therefore, it is imperative to recognize the right of the people of Iran to resist against and overthrow the mullahs’ regime.

By Jubin Katiraie The Iranian regime has fired a teacher’s...