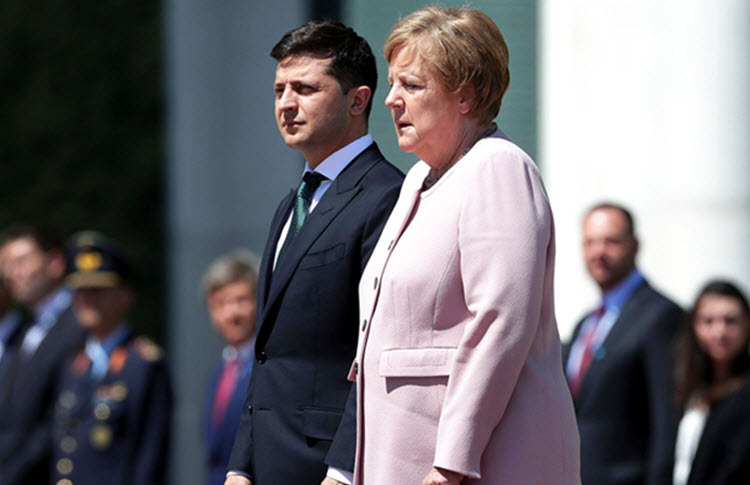 German Chancellor Angela Merkel has said that there is “strong evidence” that Iran was responsible for the attacks on two oil tankers in the Gulf of Oman last week, which supports the comments previously made by the US.

At a news conference in Berlin on Tuesday, following talks with Ukraine President Volodymyr Zelenskiy, Merkel said: “We, of course, take these explanations very seriously, and there is strong evidence.”

However, she also stressed that she is determined to resolve the conflict “in a peaceful way” and stated that Germany would tell all sides and especially Iran, “that the situation should not escalate”.

Merkel also added that Iran would face “consequences” if it did not stick to its commitments under the 2015 nuclear deal, to which Germany is a signatory, and explained that Germany is in “the closest contact” with the US, which pulled out of the deal last year citing Iranian noncompliance.

This came after Iran warned on Monday that it would surpass the agreed upon limits for enriched uranium stockpiles by the end of June and would not stop unless the other signatories agreed to help Iran bypass US sanctions to ensure that Iran received the financial benefits.

Germany is just the latest country to agree with the US assessment that Iran was behind the tanker last Thursday. US President Donald Trump said almost immediately afterwards that “Iran did it”, while UK officials said they are “almost certain” that the Gulf nation was responsible.

So far, Japan and Norway, whose boats were attacked, have not speculated who they believe to be responsible, but the Norweigan crew was picked up by Iran.

Last week, when a video of the attacks was released that the US said proved Iran’s involvement, German Foreign Minister Heiko Maas said Germany was still evaluating the evidence.

On Monday, the Pentagon released new photos, showing what they say is an Iranian Revolutionary Guard vessel approaching one of the tankers and removing an unexploded limpet mine, and a timeline of the attacks. Since the attacks, US-Iran tensions have heightened considerably, despite already being at a recent high.

These attacks occurred near the strategic Strait of Hormuz shipping, where roughly a fifth of global oil supply is shipped through. Iran vowed to cut off the strait in response to US sanctions on its oil industry that came into place between November 2018 and May 2019.