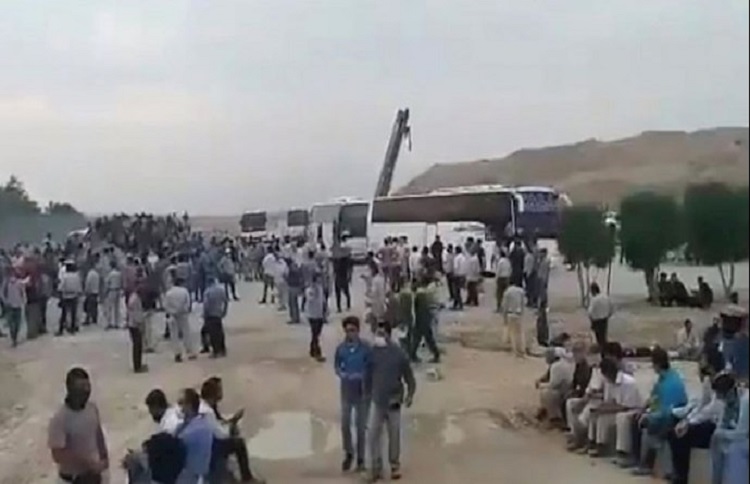 The Iranian people have been out protesting in recent days, demanding much-needed change.

On Friday, a group of substitute teachers in Isfahan gathered outside the office of their members of parliament to protest not being hired on permanent contracts.

One woman at the protest said: “They hired us when they needed us. Now they’re making excuses and saying we never worked well. Why didn’t they say anything before? And if we are good employees, they should provide us with decent contracts.”

It is not only the type of contract but also that they are not getting paid in full and on time.

A man said: “Not only do they refuse to provide our paychecks on time, but they also don’t even agree to a specific timetable in this regard. We also do not have any insurance during the summer season.”

While a female protester said: “The contracts that they sign are just words without any particular meanings. It’s written, ‘I have received my paycheck in full,’ and you have to provide fingerprints. However, I haven’t received my paycheck. And if I don’t sign, they simply lay you off.”

Another teacher said: “If I’m here today it’s only because of my poor living standards. I need the money. Otherwise, they haven’t had anything to say for years and never complained about our work.”

On Thursday, in Bushehr, residents of Dashti and Tangestan towns gathered to protest renewed work on a limestone mine near a historical site and the largest sweet water well in their area. They said that the people plundering the mine are doing construction projects for their own benefit, but that this work specifically will destroy the historical site and dry up the sweet water well.

One local said: “We have four water wells here. They’re all here. Where will our livestock go other than this place for their water? Those who authorized these projects, did you not think of our livestock? I went to the Water Organization and they denied providing any authority yesterday. If the Water Organization has not authorized it, why don’t they voice any protests? We’re here to defend this site, to defend what is right.”

While the people protest dire economic conditions, Iran’s inflation is rising because of the destructive policies of the mullahs. Professor Steve Hanke of Johns Hopkins University said that the regime’s official 26% inflation rate is false and the accurate inflation rate stands at 98%.

Two Accused of Spying for Iran in the US Plead Guilty

By Jubin Katiraie The United States Attorney's Office for...