Protests Continue in Khuzestan for the Seventh Night

At night on July 21, the people of the southwestern Iranian province of Khuzestan once again took to the streets in the cities of Ahvaz, Dezful, Shadegan, Ramshir, Mahshahr, Khowr-e Musa, and Masjed Suleiman.

Furthermore, the protests over water shortages in Khuzestan expanded to other parts of the country, and residents of Yazdanshahr, Isfahan province, and Karaj, Alborz province, and Bushehr and Bandar-e Genaveh, Bushehr province, came onto the streets, declaring their solidarity with protesters in Khuzestan.

To silence demonstrators, authorities mobilized a significant number of security forces and members of the Islamic Revolutionary Guard Corps (IRGC) from various provinces and dispatched them to Khuzestan. However, fed-up people, who have nothing to lose, continued protests despite a heavy security atmosphere and the government’s atrocities.

Simultaneously, the people once again flooded onto the streets in Susangerd and Ramshir despite the government’s cruel suppression. In Shadegan and Masjed Suleiman, outraged people held massive gatherings and marches in support of other cities. They called on citizens to unite against the oppressive government.

In Khowr-e Musa, the people joined the demonstrations and came to the streets. In Behbahan, protesters set tyers ablaze and blocked several roads to slow oppressive forces’ move and prevent more suppression. In Dezful, demonstrators blocked several streets. Security forces tried to intimidate them through air shooting and chasing youths. However, they extremely resisted and pushed back oppressive forces.

Moreover, youths in the Sheiban district of Ahvaz joined the protests against severe water shortages and blocked the main access road in the region. In the Zargan and Malashie districts of Ahvaz, the people once again took to the streets and chanted anti-establishment slogans against the religious dictatorship ruling Iran.

In Yazdanshahr, Isfahan province, the residents of Eidivand district rallied in solidarity with the people of Khuzestan. To disperse protesters, security forces attacked them. In response, people resisted and chanted against Khamenei as the root of Iran’s dilemmas.

In Karaj, Alborz province, the residents of  Mahdasht district went on the rooftops and chanted in support of the people of Khuzestan. “Khuzestan is not alone,” they chanted. Furthermore, the residents of Bushehr and Bandar-e Genaveh cities took to the streets in solidarity with the protesters in Khuzestan and blocked several streets, preventing the government from dispatched oppressive forces to Khuzestan.

The recent protests, which have continued for a week, have severely shocked the authorities. In tandem with oppressive measures, they try to portray a popular image of themselves. Khamenei, who was targeted by outraged chants, reposted his deceitful remarks on Instagram to evade responsibility.

“Officials are tasked to follow up Khuzestan’s problems. If someone thinks about the people, they cannot remain comfortable versus the hard issues in Khuzestan. This is a definite, urgent, and ongoing task of governments to think about the people,” Khamenei posted. 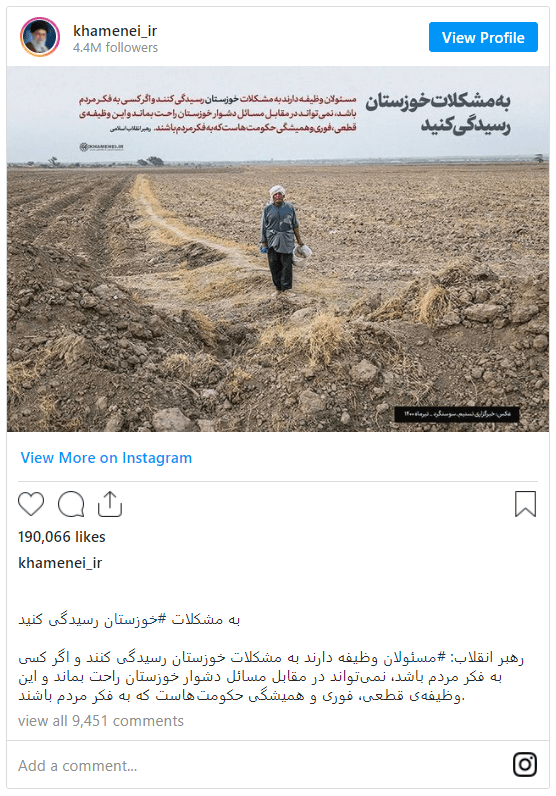 On the other hand, the government continues oppressive measures and dispatches more riot forces to the region. Authorities also disrupted mobile internet to prevent leaking more information about Khuzestan protests and pave the path for more suppression.

AFP: Iranian women have been forced into slavery, the...

New York Post: Want to see US bipartisanship on...

The Iranian regime’s leadership has reacted to the ongoing...
News on Iran Protests & Demonstrations

In a silly and desperate statement, the Iranian regime’s...
News on Iran Protests & Demonstrations