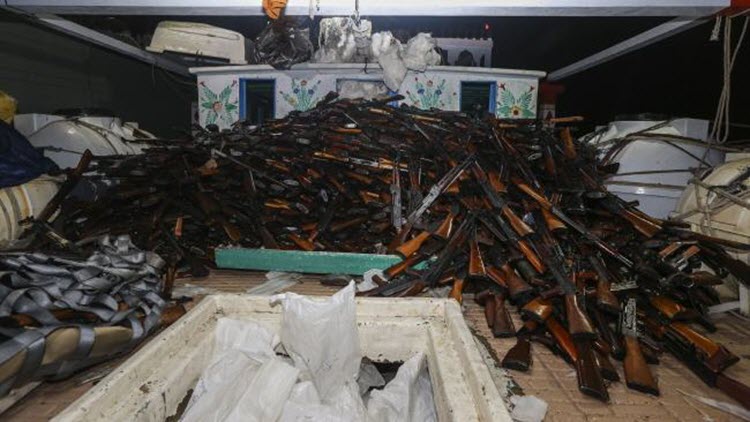 London, 31 Mar – On March 20 a large shipment of arms believed to have come from Iran was seized by the French Navy off the coast of Somalia. The cache, which included several hundred AK47 assault rifles, machine guns and anti-tank weapons was spotted heading toward Somalia by a helicopter performing routine surveillance although the ultimate destination is believed to be Yemen.

This is the second large weapons seizure in the region this month after an Australian naval ship found a similar load near Oman. Commander Kevin Stephens, a spokesman for the US Navy’s 5th Fleet told CNN that both were likely to have been heading to Yemen from Iran via Somalia.

As Somalia was considered the recipient of the weapons they were in violation of an arms embargo and seized in accordance with the United Nations Security Council Resolution 2244 (2015).

The French and Australian ships are operating as part of the Combined Maritime Forces (CMF) that police three million square miles of international waters. The force is legally mandated to board ships that are unmarked– known as “flag verification boardings”.

Iran has been accused of arming Yemen’s Houthi rebels who are fighting the country’s government in a civil war. The seizure of weapons adds weight to the claim that the Iranian government has been promoting sectarian conflict in the Middle East as part of a regional power play.

Reuters: Iran urged the European Union on Tuesday to...

Many experts around the world have warned that the...