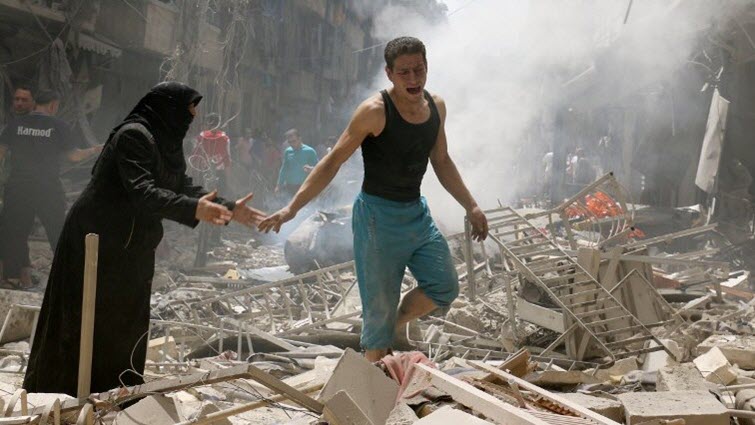 London, 3 May – On 27 April al-Quds hospital in Aleppo was hit by airstrikes killing over 50 staff and patients. The 34-bed Médecins Sans Frontières (MSF) run facility was destroyed. Emergency rooms, intensive care units, operating theatres, and the main referral centre for paediatrics were in ruins. Of the eight doctors who worked in the hospital two were killed, including Dr. Muhammad Maaz, whom Britain’s Channel 4 say was the last paediatrician in the city. Almost 60% of hospitals in Syria are either completely out of service or running at reduced functionality.

The World Health Organisation reported in September 2015 that 654 doctors had been killed in five years of war. Two days after al-Quds was hit another hospital was targeted by further strikes. The ceasefire is not holding in Aleppo. At least 200 people have died in the city in the last week. Bombardments have killed 123 civilians in rebel-held areas and 71 people in rebel attacks on government-held areas.

Maryam Rajavi, President-elect of the National Council of Resistance of Iran (NCRI), called the bombings a “war crime” and strongly condemned the deaths. Reiterating Iran’s complicity in the attacks, Rajavi added that Syrian leader Bashar Assad was receiving backing from the Iranian government through the Islamic Revolutionary Guards Corps (IRGC), Hezbollah and foreign mercenaries from Afghanistan and Pakistan.

Attacks on medical facilities and civilians are becoming a dangerous norm, and the international community’s response is paralytic. In 2015, some 75 MSF facilities were the target of 106 bombing and shell attacks similar to that which struck al-Quds.

“The recent attack on the ICRC-supported Quds hospital is unacceptable and sadly this is not the first time the lifesaving medical services have been hit”, saidMarianne Gasser, head of the International Committee of the Red Cross’s Syria Mission.

“We urge all the parties to spare the civilians. Don’t attack hospitals, don’t use weapons that cause widespread damage. Otherwise, Aleppo will be pushed further to the brink of humanitarian disaster”.

Reuters: The trial of a French teaching assistant accused...