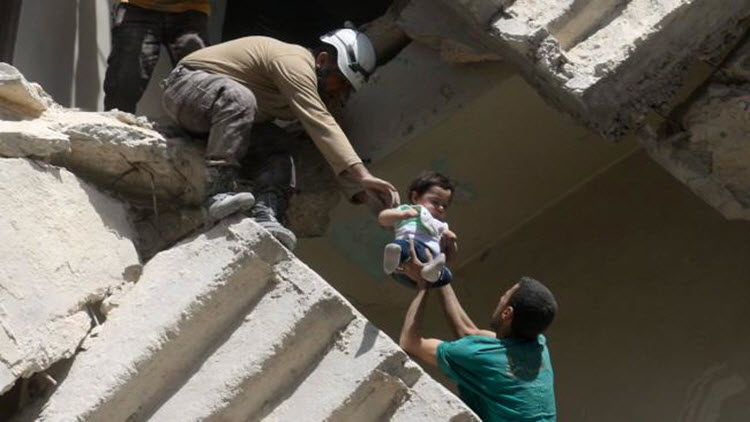 London, 5 May – A Syrian volunteer aid group accused Syrian President Bashar al-Assad of deliberately and repeatedly attacking rescuers and aid centres in Aleppo. Intense fighting has gripped what was once the most populous city in the country. The Syrian Civil Defence group, eponymous for their white helmets, have pulled around 41,000 people from the ruins of buildings since their formation in early 2013.

The White Helmets formed in rebel-held areas that were facing indiscriminate bombings from the government’s air force. From small beginnings the organisation now has almost 3,000 volunteers across eight provinces including Homs, Idlib and Damascus in addition to Aleppo.

On Sunday 1 May the Aleppo Free Council and representatives from the White Helmets gave accounts of the recent vicious attacks. Assad, as well as Russia and Iranian forces should be prosecuted for war crimes according to Ibrahim Hilal, a lawyer and head of the Aleppo province White Helmets.

“Their warplanes have carried out over 320 aerial attacks on Aleppo. Additionally they have used 65 barrel bombs and fired 110 artillery rounds and 17 surface-to-surface missiles on Aleppo”, Hilal told the Iranian opposition satellite channel Simaye-Azadi.

Last week’s attack on a Médecins Sans Frontières killed over 50 and made clear the failures of the ceasefire agreed in February 2016. Attacking civil infrastructure and facilities is illegal under several international conventions on warfare.

International condemnation has been slow to come and lacked bite. Hilal said there was “systematic international silence in the face of the crimes”. Looking to the future Hilal was pessimistic saying that warplanes were not leaving Aleppo’s skies. The spike in violence has tested the breadth of the White Helmets – with at least 330 rescue operations taking place. Syrian jets targeted one of the White Helmets’ centres in Aleppo killing five and injuring others.