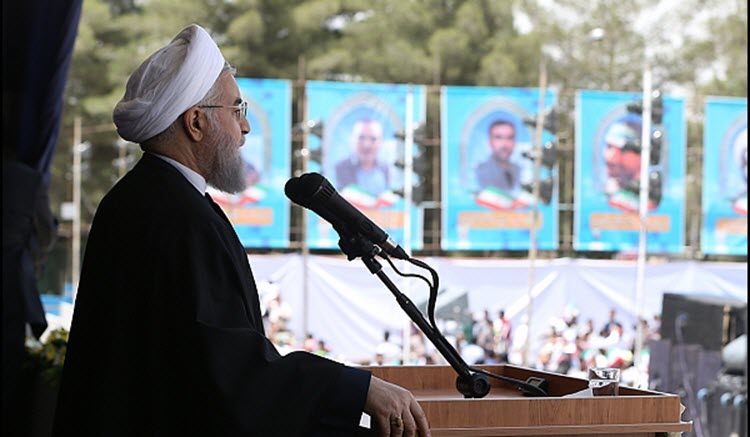 Tehran, 10 May – President Hassan Rouhani was lavish in his praise of top Quds Force commander Qassem Soleimani during a rally on Islamic Revolutionary Guards Corps (IRGC) Day. The event took place in Kerman, the hometown of Soleimani, whose old-school brand of intelligence work has won him gritty profiles in the New Yorker and the Guardian.

Rouhani said Soleimani is among the “honours” of Kerman and Iran. The Iranian President was unequivocal of Soleimani’s impact throughout the region. Links between the two date back to the Iran-Iraq War of the 1980s.

“Today if we look at eastern Iran, throughout Iran and throughout Afghanistan, Iraq, Syria, Lebanon, and Palestine we witness the hallmarks of General Soleimani’s courage and fearlessness”, Rouhani said.

Soleimani is the commander of the Qods Force, the IRGC’s extra-territorial military-intelligence operations division. The Qods Force have been tied to numerous devastating attacks including the 1996 bombings of the Khobar Towers in Saudi Arabia that killed 19 and the bombing of an Argentine Jewish community centre in 1994 killing 85.

The IRGC is Iran’s way of interfering with regional order. Supporting Hezbollah and militias within Palestine as well as across the whole Middle East and North Africa region and indeed the world. Within Iran the IRGC is believed to be one of the most influential domestic factions. In addition to its military personnel- including aerospace and naval forces- the IRGC’s grip on industry and governing structures has been expanding since the 2009 elections and attendant protests.

“The IRGC has always been a pioneer for solving the crises of the country. Today the IRGC is not only responsible for the country’s security, but also for the security of the countries’ that need Iran’s help, and it is courageously present in all those scenes”, Rouhani said.

Currently Soleimani is heading up the Iranian effort in Iraq and Syria. Coming to the aid of Syrian President Bashar Al-Assad is vital to maintaining the Iranian government’s power, so it is unsurprising to see Iran’s pre-eminent military commander deep in the conflict. The praise for him and the IRGC in general is Rouhani’s way of boosting morale as reports of heavy losses make their way back to Iran.

AFP: Mehdi Karroubi, the ex-parliament speaker of Iran, has...