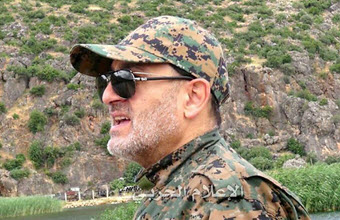 Iran Focus
Tehran, 17 May – Iran’s Foreign Minister Javad Zarif poured praise on a Hezbollah commander who was killed in Damascus last week. Mustafa Badreddine, 55, died in a “huge explosion” near the Syrian capital. Speaking to state-run news agency IRNA Zarif said Badreddine was “was full of spirit and heroism in defending the righteous values of Islam and the combatant people of Lebanon”.

Badreddine was an early recruit to Hezbollah, the Lebanese militia, along with his brother-in-law Imad Mugniyah, according to the Iranian opposition National Council of Resistance of Iran (NCRI). Mugniyah was killed in 2008 and is believed to be responsible for the 1983 US Marine barracks bombing in Beirut that killed 241 people. The death of Badreddine is the removal of one head, but some in the region fear that the Hydra of fundamentalism will sprout another to take his place. Badreddine has a long history of violence; he was indicted in 2005 for the killing of Rafik al-Hariri, the former Prime Minister of Lebanon.

The death comes as Syria’s conflict ratchets up again in the summer heat. Attempts at brokering a ceasefire around the hotspots of Aleppo have failed, the death of a high-profile commander in Damascus hints at the elasticity of violence in the region and the futility of containing it.

Firouz Mahvi of the Foreign Affairs Committee of the NCRI on Saturday said:“Heaping such praise on a notorious international terrorist clearly shows the true nature of the mullahs’ foreign minister Javad Zarif so far as it pertains to his belief in terrorism as a state tool. This is in tandem with Zarif’s previous acts such as laying a wreath at the grave of Imad Mughniyah, the former military commander and head of the terror apparatus of Hezbollah, in 2014. This once again manifests a simple reality that the so-called ‘moderate’ official of the clerical regime is simply a smiling terror master.”

Zarif was Iran’s lead negotiator in the nuclear deal and received wide press coverage of his meetings with US Secretary of State John Kerry.

Reuters: Iran is raising its exports of iron ore...