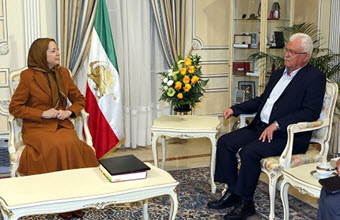 Iran Focus
Paris, 17 May – The head of the National Council of Resistance of Iran (NCRI) Maryam Rajavi met with a senior Syrian opposition figure George Sabra on 12 May, the NCRI has reported.

Sabra, a member of the team negotiating on behalf of the National Coalition for Syrian Revolutionary and Opposition Forces and leader of the Democratic People’s Party of Syria, met Rajavi in a Parisian suburb to pay tribute to those killed in the Syrian conflict and the “heroic resistance” taking place in Aleppo against Bashar al-Assad’s regime.

The goals of the opposition movements in both Iran and Syria are aligned, with their respective official government’s forming an alliance against them.

“The goals of the Iranian Resistance and the Syrian Revolution are common, our enemy is common and the battle for freedom and dignity is also a common battle”, said Sabra, the NCRI reported on its website.

Sabra used the opportunity to reiterate the hardship and brutality of the ongoing conflict on people and infrastructure. Assad and Iran’s complicity in the “massacre” of thousands of people has been called a “war crime” by Rajavi and members of the European Parliament. Sabra drew attention to the city of Darayya near Damascus which has seen its population plummet from 400,000 to just 8,000. Iran’s Islamic Revolutionary Guards Corps (IRGC) and Iranian backed militias have encircled the city for the last four years; just one of dozens of cities suffering the same fate across Syria and Iraq.

“I contacted Darayya’s City Council just yesterday and they emphasized that we should not show any weakness in the negotiations. They told us: ‘Don’t think of us or the blockade. Think of the Revolution and our people’s destiny’”, Sabra added.

Maryam Rajavi was supportive of Sabra’s position on Assad, sharing the pain of the brutal conflict but seeing cases for optimism in the strength of a population under siege. The Iranian government’s interventions in Syria have yielded many casualties. Rajavi called this time one of the “perilous periods of existence” for the Iranian government as a result.

By Pooya Stone An Iranian prisoner of conscience began a...