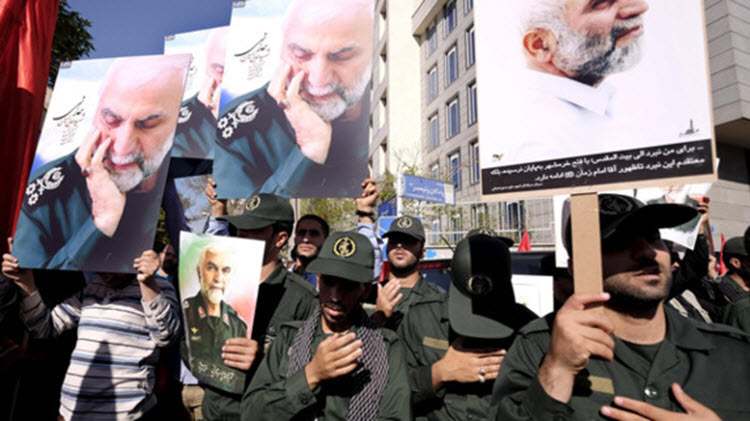 London, 6 November – On November 4, the National Council of Resistance of Iran (NCRI) reports on the growing number of the Islamic Revolutionary Guards Corps who are killed during the conflicts in Syria; the death toll is increasing.

On November 1, 2016, the Turkish Anatolia News Agency reported that the number of the Iranian senior military dying in the Syrian civil war has reached fifteen. These were commanders of s of the IRGC, who were fighting in Syria since 2013.

In 2012, when conflict arose in Syria, commanders were deployed to Syria as fighters and advisors, who would train and provide the affiliated militias with logistical supports.

The report reads:
“The Iranian Seniors’ death in Syria is steeply ascending. During the continuing conflict in Syria, Iran has been losing a number of commanders since 2013.The instance of such loss is the guardsman Zakeri who was killed in Aleppo two days ago. He was the former commander of IRGC’s operation in East-Azerbaijan Province and he went to Syria to serve as an advisor after his retirement.

“Also, the guardsman Gholamreza Samaee was killed in the clashes on 28th October 2016.He was one of the commanders and fighters of IRGC and considered to play a significant role during the Iran-Iraq war.

“The guardsmen Dariush Dorosti and Ahmad Gholami were respectively killed in Hama and Aleppo on 2nd September and 31st October 2016.The most serious harm inflicted the Iranian regime in the last September. The deputy Chief Commander of the Qods Force, the guardsman Hossein Hamedani was killed in Aleppo on 9th October 2015. Four days after this incident, the other commanders of IRGC ,Hamid Mokhtarband and Farshad Hasounizadeh were also killed in the city of Hama.

The guardsmen Javad Dourbin and Shafi Shafiee were also killed in the southern area of Aleppo, Khan Tuman in May 2016.The other fighters such as Hasan Shateri, Mohammad Jamalizadeh, Abdollah Eskandari, Abdolreza Mojiri, Jabbar Darisawi, Ali Allahdadi, Mohsen Ghajarian, and Hasan Ali Shamsabadi were also killed in different regions of Damascus, Aleppo and Quneitra. The other militants that are affiliated with the Iranian regime are Fatimid Division and Zainebiyoun Brigade.

“Iran’s regime employs Afghan and Pakistani militants within the two aforementioned brigades in Syria which have been inflicted by great harms during the clashes in the country.

“The afghan commander of Fatimid Division, Alireza Tavassoli was killed in the region of Deraa during the conflict in March 2016.The other commanders of Fatimid Divison such as Reza Khavari, Hossein Fardaei, and Ali Bayat were also killed in Syria since March 2015.

“The commander of Fatimid Divison, Mohammad Hassan Hosseini was also killed in Palmyra in June 2016.

“There is no official figure to show the number of Iranian casualties in Syria but as a rule of thumb, 1360 people that have been deployed to Syria so far were killed during the clashes.”

Reuters: He is believed to top the list of...

13 US Senators Call for Investigation in Iran Prisoner Swap

Iran Focus  London, 8 May - Thirteen US Senators have...