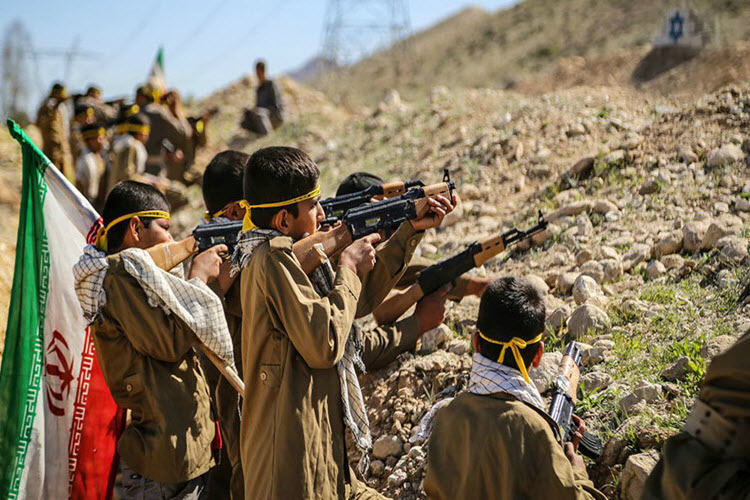 London, 24 Jan – Iran has begun recruiting child soldiers to its paramilitary Basij unit, some as young as eight-years-old, with the money it has received from the 2015 nuclear accord.

The children are being taught to hate Western values and specifically to hate (and attack) the US, whom they call “the Great Satan”, and Israel, “the Little Satan”.

The Iranian Resistance, who abhor the use of children in military activity, have translated one of the Regime’s recruitment videos into English. The video called on children to be martyrs for their cause; one of the lines said: “On my leader [Ali Khamenei’s] orders I am ready to give my life”.

There is even a so-called theme park, where children are taught to fight against the US and Israel; firing bullets through US and Israeli flags or at effigies of world leaders like Israeli Prime Minister Benjamin Netanyahu.

Israel National News reported on the child soldier theme park and stated that children dress up in army uniforms and are split into small groups, before going through “activity stations”, including a simulation of Iran-Iraq war and crossing a minefield covered in barbed wire, all whilst being told about the directives of Supreme Leader Khamenei and former Supreme Leader Khomeini.

Hamid Sadeghi, director of Iran’s Child and the Future Cultural Centre (which runs the theme park), said: “At the City of Games, we are trying to convey to the children messages about fighting, the Holy Defence and current global issues, through games, amusements, and group activities.”

Reportedly, Iran is not just brainwashing children for future wars but are already using minors in their military. This dangerous and inhumane act is a crime under international law but rather than receiving punishment, the institutions who organise this are receiving money from the lifting of sanctions.

We must call upon the UN to bring those responsible before the International Criminal Court before it is too late to save these children.

AP: Iran said Sunday it is holding a German...