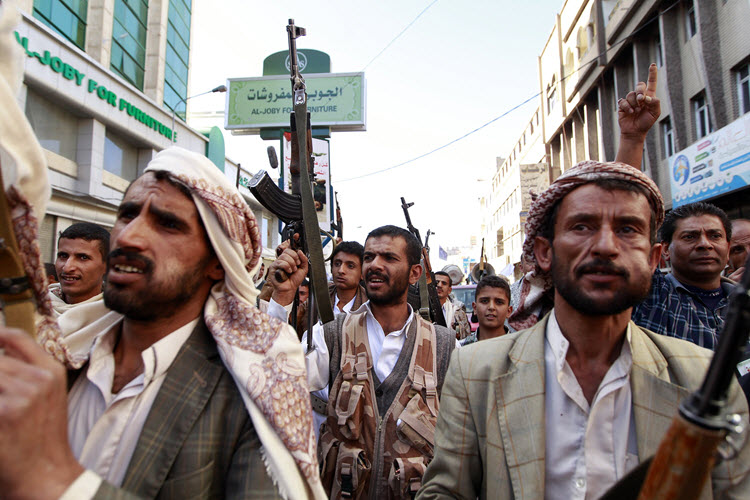 London, 29 Mar – It has been reported that Iran is in the process of sending military advisors and sophisticated weaponry to the Houthis in Yemen in a bid to increase its support for Shiite allies.

In Yemen, Saudi Arabia is leading a Sunni Arab coalition to combat the Houthi movement that is supported by Iran and experts say the war in Yemen is sure to change the balance of power in the Middle East.

Ramping up its support for the Houthis is the same strategy that Iran adopted in Syria where it supports the Lebanese Hezbollah. The Iranian regime believes that success in both Syria and Yemen will give the country the upper hand in the region.

The commander of Iran’s Quds Force, Major General Qassem Soleimani, met with senior officials of the Islamic Revolutionary Guard Corps (IRGC) last month to decide on a strategy that would “empower” the Houthis. They decided that in the first instance increasing training, financial support and the supply of weapons was what would be done immediately.

Spokesman for the Arab coalition, Brigadier General Ahmed Asseri, has said that there is plenty of evidence to show that Iran is smuggling weapons into the country, despite claims that it isn’t.

The Sunni Muslim countries in the region are concerned about the influence of Iran and call for it to be expelled from Yemen.

Iran’s aim in Yemen is to encompass the Saudis and to expand its power across the Middle East.

Despite great efforts to intercept shipments to Yemen, Iran is succeeding in transporting supplies to the country. Asseri said that it is nigh-on impossible to police almost three thousand kilometres of coastline.

Director of Armament Research Services and expert in military arms, Nic Jenzen-Jones, said that the quantity of arms being shipped to Yemen has been increasing rapidly. He added that the quality and sophistication of the weapons is improving too.

For example, recent shipments to Yemen have included sophisticated drones that have in-built high explosive warheads. He said: “Recent transfers of arms and munitions have also included Iranian Ababil series UAVs (drones), fitted with high explosive warheads and used by Houthis to engage high-value targets, such as radar and Patriot missile batteries.”

In terms of advisers, Iran has been sending Shiite Arab specialists (including several Afghans who were in Syria fighting for the Quds Force) to train Houthi fighters in Yemen.