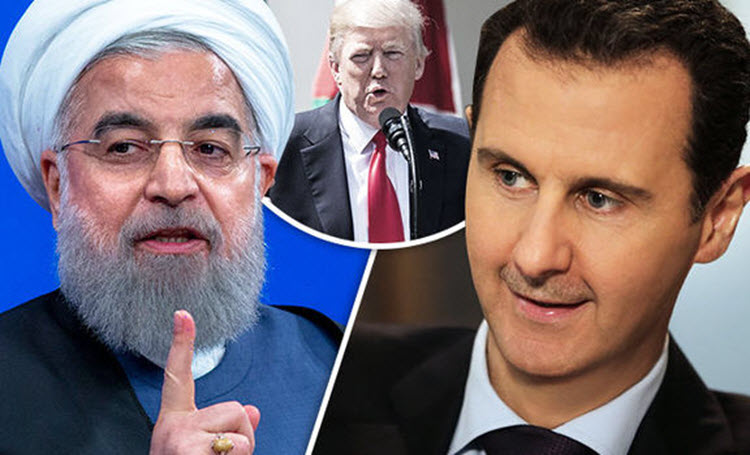 London, 13 Apr – In a reaction to the missile attack by the United States following the horrifying chemical attack in Syria which led to the death of dozens of civilians, the President of Iran, Hassan Rouhani, said that his country was prepared to join Vladimir Putin in using force against Donald Trump if their “red lines” are crossed.

However, it must be noted that this reaction is perhaps better than expected when we consider that Iran has committed tens of thousands of troops to the front line in the Syrian civil war. Many of those who go to Syria on behalf of Iran are refugees who have come to Iran looking for freedom. Many Afghan refugees have been sent to Iran and treated as expendable in the face of enemy fire. The widows of these men are granted Iranian citizenship and are given a very small pension.

Billions of dollars worth of weapons and military resources are sent to Syria every year in an effort to prop the bloody Assad regime up. It is probable that both Iran and Russia knew that the most recent chemical attack was going to happen. Just before the sarin bomb was dropped on Khan Sheikhoun a Russian drone flew over the town. Iran and Russia were also involved in the coordination of previous attacks involving chlorine gas and barrel bombs. Attacks that hit the civilian population.

The reaction of Russia is also quite ironic. For the past year and a half, thousands of civilians have been killed by the continuous wave of warplanes sent by Russia to bomb Syrian cities. So for Putin to describe the US strike as “aggressive”, “not permissible” and a violation of international law is laughable.

Iran is able to carry out its terrorist activities through its Islamic Revolutionary Guard Corps (IRGC). It was recently revealed by the National Council of Resistance of Iran (NCRI), the main opposition, that the IRGC had complete control over 90 of 202 docks in Iran. It is able to use these ports to export military personnel and large stores of weapons to places where Iran is involved in conflict (Syria, Yemen, etc.).

The IRGC also plays a major role in the massacres carried out against Sunni provinces in Iraq. Here, and in other areas in the Middle East, the Iranian regime is carrying out horrific crimes against humanity. At home, too, the people are repressed to an extreme extent. The survival of the regime in Iran is dependent on the export of fundamentalism and terrorism – its main pillar.