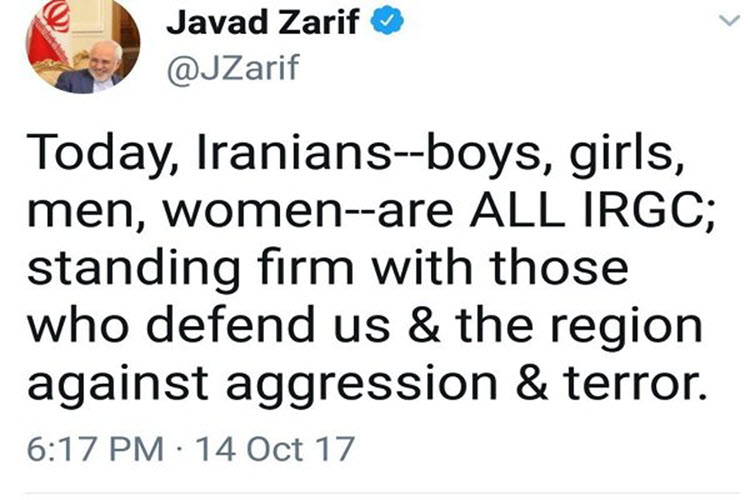 London, 17 Oct – Just one day after the US Department of Treasury designated the Iranian Revolutionary Guard Corps (IRGC) as a terrorist organization, Iran’s Foreign Minister Mohammad Javad Zarif has made the bizarre claim that the IRGC represent all Iranians.

Zarif tweeted: “Today, Iranians–boys, girls, men, and women–are ALL IRGC; standing firm with those who defend us & the region against aggression & terror.”

This is, of course, completely untrue.

Many Iranians- both in Iran and around the world- used the hashtag #WeRejectIRGC to dismiss Zarif’s nonsensical claims and point out that the IRGC has a long history of carrying out acts of terror- both directly and through its Middle Eastern proxies.

The IRGC (which is the financial lifeline of the Iranian Regime) also has a long history of attacking Iranians, some of which are displayed below:

• 1990: On March 14, the IRGC attempted to assassinate Hossein Abedini, an Iranian parliamentarian in exile and a member of the Foreign Affairs Committee of the National Council of Resistance of Iran (NCRI). The IRGC blocked his vehicle on his way to the Istanbul Airport in Turkey. Abedini was shot and went into a coma for 40 days. He ultimately survived the attack.

• 1990: On April 24, 13 Iranian terrorists carrying service passports issued by the Iranian Foreign Ministry assassinated Professor Kazem Rajabi, a representative of the NCRI, by shooting him near his home in Geneva, Switzerland.

• 1992: On June 5, agents of the Iranian Regime kidnapped Ali Akbar Ghorbani, a member of the Mujahedin-e Khalq (MEK), in front of his home in Istanbul, Turkey, and tortured him to death. A captured terrorist led the police to his shallow grave on the outskirts of Istanbul.

• 1993: On March 15, Mohammad Hossein Naghdi, the representative of NCRI, was assassinated by the IRGC as he drove to his office in Rome, Italy.

• 1996: On February 20, terrorists from Tehran assassinated Zahra Rajabi, a senior member of NCRI, in her home in Istanbul, Turkey. She had gone to Turkey to assist Iranian political refugees. Her colleague, Abdul Ali Moradi, was also killed.

• 2009: In June, Iran’s security service assassinated Neda Agha Soltan in the streets of Tehran during the Green Revolution sparked by protests against Mahmoud Ahmadinejad’s fraudulent re-election to the presidency. Iran’s paramilitary Basij forces were accused of brutally suppressing protests in the aftermath of that election.

Iran’s President Hassan Rouhani recently praised the IRGC just before the US’ designation of the group as a terrorist group.

Reuters: An Egyptian accused of spying for Iran said...