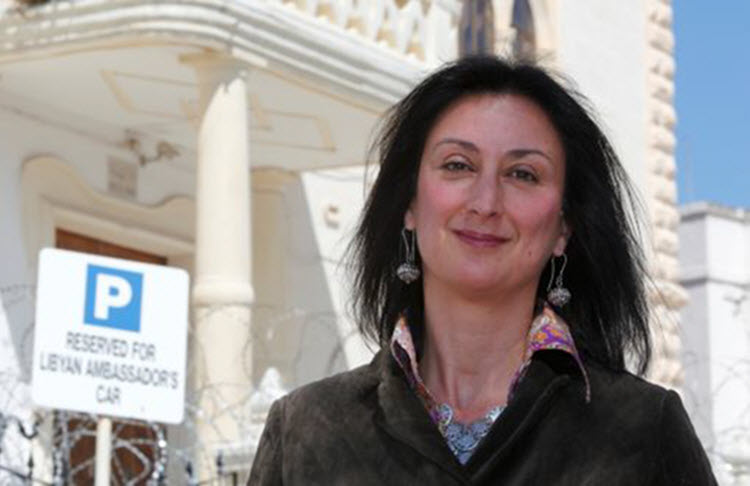 London, 05 Apr – In October of last year, a car bomb claimed the life of Maltese investigative reporter Daphne Caruana Galizia. One of the 47 libel suits against her was quietly dropped at a county court in the US the next day.

Proceedings were filed against Caruana Galizia earlier last year by Maltese private bank, Pilatus Bank and its owner, Iran-born Seyed Ali Sadr Hasheminejad, known as Ali Sadr. It came after a series of stories published on Caruana Galizia’s website claiming that Pilatus had laundered funds from allegedly corrupt schemes on behalf of offshore companies and individuals. They included Keith Schembri, chief of staff to the Maltese prime minister, Joseph Muscat.

The stories culminated in the claim that Michelle Muscat, the prime minister’s wife, had received $1 million from the daughter of President Ilham Aliyev of Azerbaijan, with the money moving through a Panamanian shell company in transactions facilitated by Pilatus. They were based in part on the release of files in the Panama Papers.

Sadr was arrested in the US in March, and charged on six counts of evading Washington’s sanctions against Iran. According to prosecutors, he organized a scheme to illicitly funnel more than $115 million from a Venezuelan housing project to Iranian-controlled companies via western banks that lasted from 2006 to 2014.

Sadr is alleged to have used “deceptive means” to hide the role of Iranian parties in the US dollar payments. With the help of seven co-conspirators Sadr set up Swiss, Turkish, and offshore entities and arranged for funds to be transferred through Swiss and US banks, prosecutors say.

He also used a St Kitts and Nevis passport and an address in Dubai, which prosecutors believe were intended to mask his Iranian connections.

Sadr was removed from his role at Pilatus and his voting rights suspended after his arrest. The Maltese Financial Services Authority hired an experienced former US regulator to take control of the bank’s assets and stopped all transactions, including withdrawals or deposits.

Last week Sadr pleaded not guilty and was denied bail. “Mr Sadr intends to vigorously defend himself and looks forward to doing so in court,” Baruch Weiss, his lawyer in the sanctions matter, told the Financial Times.

Sadr’s indictment raises uncomfortable questions for Europe. Sadr’s arrest is the latest in a series of cases which cast doubt on the ability of European regulators, law enforcement agencies, and financial institutions to police money laundering.

The indictment was unsealed on March 20th, and Pilatus is not mentioned. There is no allegation that the bank was involved in the illicit scheme that led to his arrest. However, the indictment revealed that during the time Sadr began the process of applying for and obtaining Pilatus’s banking licence in Malta, he was still involved in the alleged sanctions evasion scheme and was under investigation by US authorities.

Echoing questions raised by Caruana Galizia, some MEPs ask how a 32-year-old with no public record in banking set up a private Malta bank geared to high net worth individuals and politically connected clients. The bank holds more than €300 million in assets, according to its latest annual report.

Maltese MEP David Casa, who has campaigned for Pilatus to be investigated, believes that problem goes beyond Sadr’s alleged subterfuge. He says it exposes the inherent weakness of the EU’s “passporting” system, which allows financial companies and banks licensed in one country to transfer their permissions to operate in another EU country. “The proper functioning of the passporting system is necessarily dependent on the robustness of the procedures carried out by the regulatory authority of the member state in which the entity is licensed,” Mr Casa wrote in a letter to the UK’s Prudential Regulation Authority last month.

Last month the chairwoman of the European Central Bank supervisory board, Danièle Nouy, told an EU parliamentary committee that it was “very embarrassing to depend on the US to do the job.”

For years, US prosecutors have for years been investigating allegedly illicit flows from Venezuela to Iran as part of a broader push to put pressure on the Iranian economy by Washington, especially before the 2015 nuclear deal with Tehran.