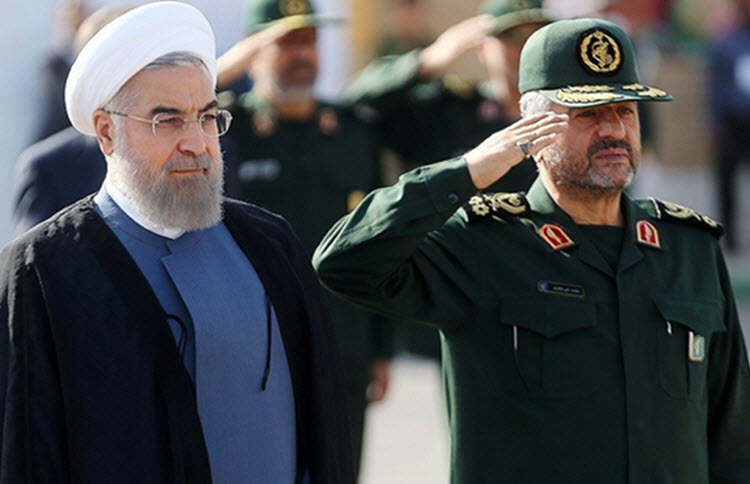 London, 24 Apr – Marking the anniversary of its formation in 1979, the Iranian Revolutionary Guard Corps (IRGC) issued a statement on Thursday, saying that the actions of internal government figures “weaken the Guards,” and added that such criticisms “harm unity and stoke division.”

Remarks about “internal figures” were interpreted by some as its first indirect response to President Hassan Rouhani’s criticism against it.

On Wednesday, Rouhani made headlines in reformist and moderate newspapers when he hailed the Iranian army for refraining from getting involved in “political games” and commended them for implementing the directives of Supreme Leader Khomeini, and hailed the army for not “tarnishing its image with corruption cases.” Rouhani went on to say, “The military understands politics well, but it did not get involved in the political games.”

The IRGC statement followed, commenting, “cementing national security and the regional role” were possible after it “unreservedly” implemented the recommendations of Supreme Leader Ali Khamenei.

Rouhani frequently criticized the IRGC for its involvement in the economy and its hindering of foreign investment during his 2017 presidential campaign. He described it as “a government holding a rifle.”

In July 2017, Rouhani’s brother, Hossein Feridon was arrested by the IRGC on on suspicion of “financial irregularities.” He was released 2 days later, and reported to have paid as much as 500 billion rials (US $15.3 million) for his release.

Rouhani appeared to be pursuing a public reconciliation before his inauguration in early August, when he said, “Unity among all forces and institutions is essential for the realisation of the Supreme Leader’s guidelines and serving the people.” He slipped in an allusion to his concern with the hope that “commanders would endeavor to act with total transparency”. The Guards reciprocated by withdrawing objections to Rouhani’s re-election, and congratulating the President. According to Rouhani’s website, Jafari said, “The IRGC is ready for comprehensive cooperation with the administration in realization of the goals of the revolution.”

While the IRGC is considered a military alongside and equal to the official army, the army does not involve itself in political or economic affairs. Such involvement is part of the reason for the IRGC’s growing unpopularity and the increasing public scorn it has incurred.

As well, the army is not seen as interfering in Iranian public life, whereas the IRGC’s security apparatus is viewed as repressing the Iranian people’s freedoms.