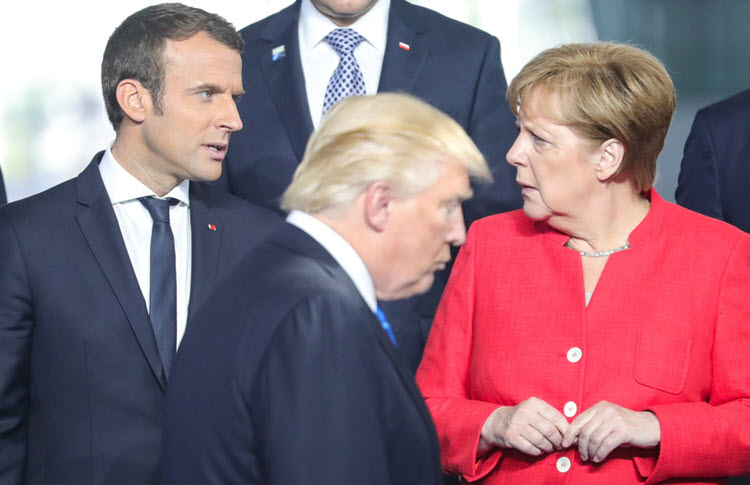 On Sunday, the CBS News program Face the Nation aired an interview with Iranian Foreign Minister Mohammad Javad Zarif, leading to widespread reporting upon his comments regarding the 2015 nuclear deal, as it faces a crucial deadline. In January, US President Donald Trump renewed the sanctions waivers put into place by the Joint Comprehensive Plan of Action, but announced that he would not do so again unless Congress and the European signatories to the nuclear deal agreed upon a plan for fixing its “terrible flaws.” Progress toward such an agreement has been slow, but the American waivers must be renewed by May 12.

With less than three weeks until that deadline, Iran is accompanied both by its allies and by allies of the US in efforts to convince Trump to remain a party to the agreement. French President Emmanuel Macron arrived in Washington on Monday for a three-day visit during which he is expected to press for an agreement that reconciles some of Trump’s concerns with the widespread European support for the JCPOA.

Trump has demanded an expansion in the monitoring of Iran’s nuclear activities, an extension of so-called “sunset provisions” that allow the restrictions on those activities to begin lifting after 10 years, and new constraints on Iran’s ballistic missile program and its activities in the region. France has been particularly vocal about these latter issues, which are not directly addressed by the JCPOA, and this position has apparently helped to push the European Union in the direction of an agreement. The issue of sunset provisions remains a major sticking point, however, as some EU member states are fearful that it would alter the terms of the deal in a way that pressed Iran to withdraw, thus jeopardizing new trade agreements with the Europeans.

Resistance to an expanded agreement is amplified by skepticism over Trump’s willingness to find satisfaction with any proposal put forward by the Europeans. Bloomberg observed on Monday that the US president’s recent criticism of Iran, along with changes in his foreign policy staff, have suggested that he is more committed than ever to his conclusion that the JCPOA is not working. The same report notes that European powers are consequently preparing a “plan B” that entails their remaining in the agreement while the US halts its participation. But it is unclear whether Iran will be able to accept such an arrangement, especially as the Europeans continue to exert pressure on Iran’s missile activities and its role in Syria and other regional conflict zones.

For his part, Zarif wrote on Twitter that there is “no plan B” for the nuclear deal and that European leaders should convince Trump to remain a party to it after recognizing that the issue is an “all or nothing” proposition. However, as Reuters notes, the use of the phrase “plan B” was a direct reference to remarks that had been made by Macron earlier regarding the potential consequences of Trump’s withdrawal. Diplomats familiar with the matter have asserted that Macron is the EU’s best hope for convincing Trump not to abandon the agreement. However, Macron will be followed by Germany Chancellor Angela Merkel when she meets with the American president on Friday.

Meanwhile, CNN reports that the government of Russia – a seemingly steadfast ally of the Islamic Republic of Iran – has ramped up its pressure on the US over the same issue. Kremlin spokesman Dmitry Peskov echoed the sentiment expressed by Zarif and Macron, saying on Monday that there was “no alternative” to ongoing implementation of the deal as it exists. Russia and China, along with Iran itself, stand as roadblocks to any American effort to alter the JCPOA itself, but the Trump administration and its supporters appear to be banking on the prospect of a separate, European agreement that would exert additional pressure through alternative mechanisms.

But Tehran has already voiced strong objections to pressures that it sees as violating the spirit, if not the letter of the JCPOA. Toward that end, Zarif used his recent remarks on the deal to urge Washington not only to remain within it but also to begin implementing it “in good faith.” This, he said, was “more important” than simply keeping the agreement alive, since the Islamic Republic has supposedly missed out on much of the promised benefit as a result of American pressure on would-be Western investors, especially after Trump assumed office last year.

In the interest of recouping these lost benefits, Tehran has assumed a “carrot and stick” approach to its discussions with the US, according to Al Jazeera. That report describes Zarif as having taken assumed a softer tone on the issue of American nationals held prisoner in Iran, while actually intensifying the tone of his commentary on the nuclear deal and US foreign policy. The foreign minister warned the White House to abandon rhetoric that makes reference to “regime change.”

Al Jazeera notes that Trump administration officials have highlighted the goal of promoting voices inside Iranian society that could facilitate the “peaceful transition” of the national government. The report also says that Trump has sought advocates of regime change to fill key positions in his administration – a fact that was on display last month this month when John Bolton took over the position of National Security Advisor. Bolton has stated that regime change should be the declared objective of US policy toward Iran. He is also a well-known supporter of the leading Iranian opposition group, the People’s Mojahedin Organization of Iran, and a repeat guest at the annual summer rally near the Paris headquarters of the PMOI’s parent organization, the National Council of Resistance of Iran.

In his CBS interview and on Twitter, Zarif went on to say that if the US failed to drop the regime change narrative or halt its threats to the JCPOA, it would face unspecified consequences. “Iran has many options and those options are not pleasant,” he declared, according to Huffington Post. Previously, Zarif and other Iranian officials have threatened to greatly expand their uranium enrichment activities in response to actual or perceived violations of the agreement. Some have even asserted that those activities could almost immediate exceed the level that was maintained prior to the conclusion of nuclear negotiations.

Of course, by implying that the restrictions under the JCPOA had no lasting effect, these warnings only highlight the flaws that Trump and others perceive in the agreement. Those critics also worry that the suspension of US led sanctions constituted the abandonment of crucial leverage over the Islamic Republic, which might have been utilized to secure more concessions. But in this sense, the May 12 deadline for “fixing the flaws” in the deal may come at a particularly fortuitous moment.

This is to say, Iran has been facing a worsening economic crisis in the month of April, with the national currency falling to roughly half its former value since September. Tehran responded by setting an official exchange rate against the dollar that is artificially inflated although still far lower than the previous rate. But with currency traders occasionally violating government restrictions while other economic indicators continue to worsen, the Iranian regime is evidently struggling to bring the situation under control.

The Associated Press reported on Monday that Tehran has imposed a nationwide ban on cryptocurrencies in an effort to curtail money laundering and other crimes, to which it assigned much of the blame for the recent troubles. But such measures are unlikely to have much impact on the money laundering that is frequently carried out by government-linked entities against the backdrop of a corrupt system that recently spawned mass anti-government protests.

Iran’s economic troubles were potentially amplified last month after a sharp decline in oil exports, but the regime has made considerable effort to downplay this and other issues. Oil Minister Bijan Zanganeh insisted on Monday that export levels had already recovered, according to Reuters. He then went on to say that the oil industry and the Iranian economy as a whole would be able to protect themselves against the prospective end of the nuclear agreement, as well as against other threats from the Trump administration. He did not elaborate.

These non-specific declarations of economic strength were matched on Sunday by non-specific threats of military strength, which addressed the US directly. Al Jazeera quoted Rear Admiral Ali Fadavi, the commander of the Iranian Revolutionary Guard Corps’ naval forces, as saying, “The Americans have little information about Iran’s naval power and they understand our real power when either their vessels are sunken or entangled in a terrible situation.”

The IRGC Navy and the regular Iranian Navy are, he said, “a united hand in the sea which enjoys much more power than the Americans.” These remarks came just days after the regime celebrated its annual Army Day with military parades and the supposed unveiling of new military technologies. Tehran has a long history of boasting of its own military prowess even though sanctions have largely hobbled its technological development, leaving it reliant on outmoded equipment in comparison with other regional and global powers.

These facts raise questions about how seriously the White House will take the “stick” aspect of Tehran’s “carrot and stick” approach to advocating for the nuclear deal. But even the “carrot” offered by Zarif on Sunday can easily be construed as a threat, as it related to the ongoing detention of Western nationals, some of whom are in very dire situations. At least five Americans are currently being held, and Zarif told CBS that their release is possible, but only if the US undergoes a “change of attitude.”

Wall Street Journal: It didn't take long for the...

Reuters: An Iranian military helicopter crashed near the border...