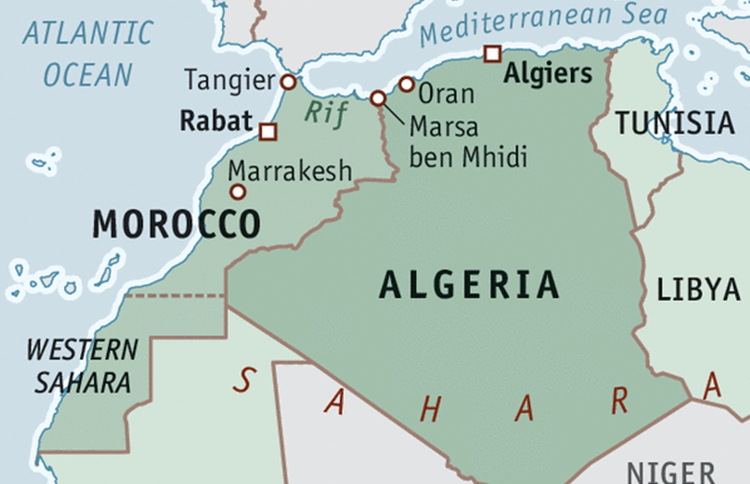 London, 10 May – The Arab world was concerned over the recent emergence of an Iranian embassy in Algeria, but the arrival of Amir Mousavi, believed to be an Iranian intelligence agent, who intended to interfere in the dispute between Algeria and Morocco over the Western Sahara conflict, led Morocco to cut diplomatic relations with Tehran.

Morocco controls about 90 per cent of the Western Sahara territory, where the Algerian-backed Polisario have been fighting a protracted guerrilla war against Moroccan security forces. Irrefutable evidence reportedly proved that shipments of weapons, which included surface-to-air missiles, comprising of SAM9, SAM22 and Strela shoulder-launched missiles, had been sent via Iran’s Lebanese proxy Hezbollah. As well, members of the Polisario, are allegedly being trained in urban warfare at a military base in Tindouf, Algeria, where they are being taught how to use ground-air rocket systems.

Mousavi is also said to have recruited thousands of Shiite youths from impoverished areas in in the country, to be used by Iran to destabilize the region.

The Western Sahara is unstable — the UN Security Council is preparing a report on whether to extend its 27-year-old peacekeeping mission to the Western Sahara, but may propose a referendum on the secession of the area away from the Kingdom of Morocco, and into the hands of the Polisario.

If this occurs, the Iranians could end up controlling any government that is eventually formed by the Polisario Front. To survive, such a government will need vast amounts of military and financial support from Iran. If the West Sahara is in Iran’s control, the next country that might fall could be Morocco, and then Algeria. This would follow Iran’s pattern of hegemonic control over a region.

Iran is trying to get a hold on Africa, arming and training Shiite rebel groups in places like Senegal and Nigeria. Western Africa has vast reserves of oil, gas, uranium, various minerals, and much sought after rare metals. The Iranian administration desires inroads there, before the People’s Republic of China (PRC), or Western nations can do so.

Iran’s interference within Shia communities and rebel groups helps to spread its influence across the region. Algeria is known to host displaced residents of the Western Sahara region, as well as Polisario members, making the country a perfect place for both Iran and Hezbollah to use as a base against rest of the region.

Algerian economy has already been badly hit by a drastic reduction in oil prices. It has diversified into other economic resources, and Iran has become a trading partner. A production line for Iranian vehicles has been launched, as well as another for the production of medicines. Iran has ensnared Algeria through an ongoing succession of trade deals.

In December 2015, following Algerian Prime Minister Abdelmalek Sellal’s visit to Tehran, Iranian Vice President Eshaq Jahangiri had paid a visit to Algeria. This, long with Algeria’s refusal to recognize any of the Syrian opposition groups, gave the Saudis and the Gulf States the impression that Algeria was siding with the Iran-Russia alliance. Algiers also voiced reservations over the Arab League’s decision to ban Hezbollah. Any future reconciliation between Algiers and Riyadh now seems remote.

Iran’s interference in the politics of Syria, Iraq, Lebanon, Saudi Arabia, Bahrain and Yemen, leaves many wondering if North Africa is the next in line for Iranian interference. There is much cause for concern over Iran’s expansionist policies.

Shelling near Iranian border is forcing Iraqi Kurds to flee

Washington Post: They have made camp below the mountainsides...