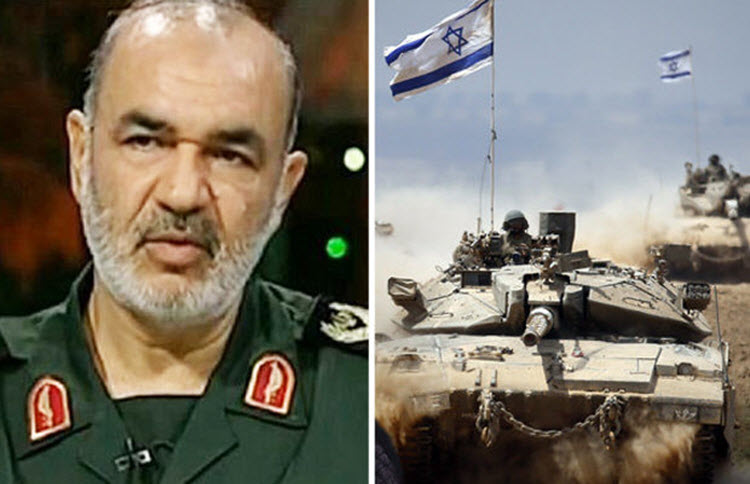 London, 10 July – The senior commander of the Iranian Revolutionary Guards Corps (IRGC) has made a terrifying threat against Israel in a speech this weekend.

Hossein Salami said that Iran had created an “Islamic army” near the Israeli-occupied Golan Heights in Syria, which he warned would be used to “end” Israel.

The Times of Israel reported that Salami had said: “Today, an international Islamic army has been formed in Syria, and the voices of the Muslims are heard near the Golan. Orders are awaited, so that the eradication of the evil [Israeli] regime will land and the life of this regime will be ended for good. The life of the Zionist regime was never in [so much] danger as it is now.”

He went on to say that Israel “constitutes a threat… to the entire Islamic world” and that this was the philosophy that the Iranian ruling system was founded on.

He also threatened that the Iran-backed Lebanese Hezbollah militia, which is participating in the Syrian civil war to keep the Bashar Assad dictatorship in power at the behest of Iran, has roughly 100,000 missiles aimed at Israel.

He said: “We are creating might in Lebanon because we want to fight our enemy from there with all our strength. “Hezbollah today has tremendous might on the ground that can on its own break the Zionist regime. The Zionist regime has no strategic-depth.”

This is believed to be the threat that Iran promised, after Israel launched missile strikes against Iran in Syria in April, killing at least four Iranian military advisers at the T4 airbase, and May, hitting dozens of suspected Iranian targets in Syria following an Iranian rocket attack on the Golan Heights.

It is important to note that although Iran claims to be targeting Israel in order to support the Palestinian people, this is actually a case of Iran co-opting a conflict in order to distract the international community from the real crises in Iran.

Iran calls for the destruction of Israel, (something that Mahmoud Abbas and the Palestinian people have not asked for,) and its support for Hamas is only to increase the chaos outside Iran and deflect from the Iranian people’s uprising.