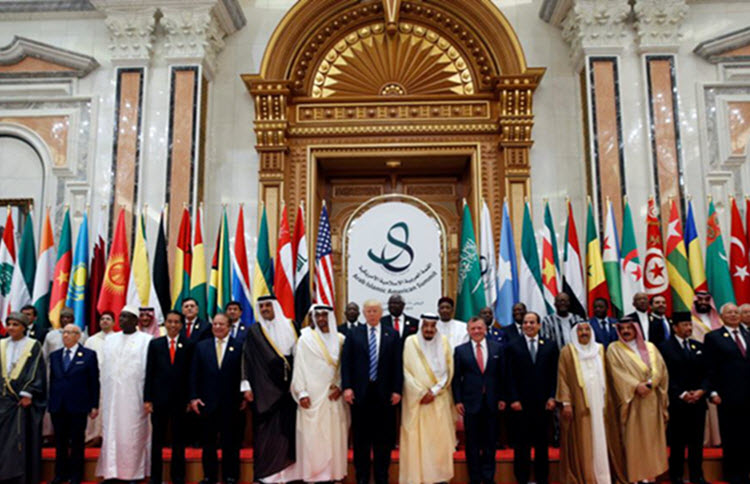 London, 30 July – Last week, the war of words between Iran and the United States became even more tense. After a threat from Iranian President Hassan Rouhani that “war with Iran is the mother of all wars”, U.S. President Donald Trump warned Iran a few hours later that Iran would “suffer consequences the likes of which few throughout history have ever suffered before”.

The Trump administration has taken a number of steps in recent months to push back against Iran. Pulling out of the 2015 Iran nuclear agreement was followed by the announcement that sanctions would be reapplied and new ones to be issued. Then the U.S. State Department announced that it expected foreign countries to reduce its imports of Iranian oil to zero by November this year.

Officials in Washington have said that the administration is working towards an alliance with regional allies to put pressure on Iran. Furthermore, it was confirmed that talks have been going on for several months.

Several officials in the Middle East and United States have described the cooperation as the “Arab NATO”. There will potentially be a summit in Washington in October.

Last year, Saudi Arabia first spoke about a security pact between the U.S. and several countries in the region. Although the idea was welcomed, nothing ever came of it. Until now.

Numerous countries in the Middle East have been particularly outspoken about the Iran threat, including the United Arab Emirates (UAE) and Saudi Arabia. Their leaders, and Trump, have all pointed out and acknowledged that Iran is the biggest source of destabilisation in the Middle East and its use of proxy groups is spreading the chaos further and further.

Washington and its Sunni Muslim allies have common interests in the Middle East and they want a resolution to the conflicts in Syria and Yemen. Another common goal is to defend the shipping routes in the Gulf in which a large part of the world’s oil supplies pass through.

One major concern regarding the success of the alliance is the dispute between Qatar and the UAE and Saudi Arabia regarding the country’s alleged involvement with terrorism. However, Trump is said to have been reassured that the dispute will not be a problem.

Last week, Anwar Gargash, a UAE government official said that the country is preparing to deploy a higher number of troops as it cannot depend on allies in the West any more.

Countering the threat from Iran is also a major goal for Saudi Arabia which has recently been on the receiving end of several ballistic missile launches by Iran.

Trump’s European allies are not very receptive to his attempts to put an end to Iran’s belligerence, but his Middle Eastern allies are.

AFP: A cacophony of horns greeted Iran's reopening on...