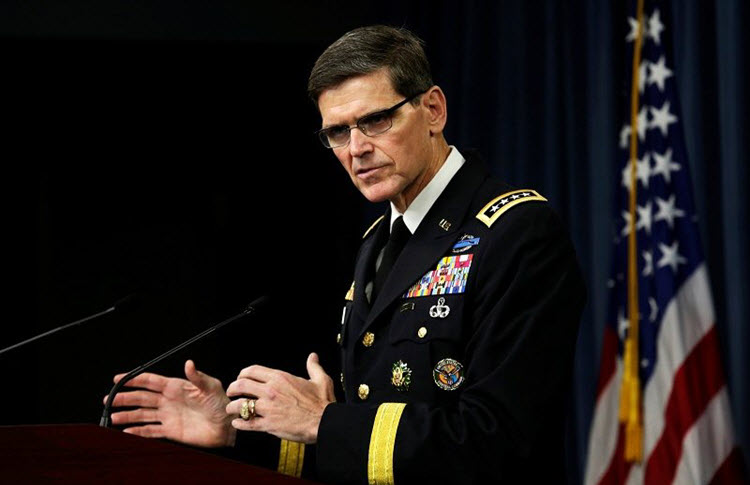 London, 10 August – The four-star US general in charge of military operations in the Middle East has heavily condemned the leader of the Islamic Revolutionary Guards (IRGC) Quds Force for his influential role in the majority of Iran’s destabilising activities in the region.

General Joseph Votel, the head of US Central Command, told reporters on Wednesday that Qasem Soleimani is the “individual who is perpetrating a lot of this destabilizing activity” and called him out for his “aggressive nature”.

Votel also vowed that the US military could and would keep the Strait of Hormuz shipping channel open, despite Iranian threats about closing it. He admitted that Iran’s “layered capabilities” in the waterway, including mines and explosive boats, create a problem, but one that the US is fully able to deal with.

He said: “We routinely focus on demining exercises in the region and we maintain forces and readiness, as do some of our partners in the region that are well trained, well prepared to deal with these types of situations.”

The US Energy Information Administration has called the Strait, through which one-fifth of global oil supply is transported, “the world’s most important oil transit chokepoint”.

In recent days, the IRGC has also tried to send a message to the US by conducting a major naval exercise early, at the same time that the US re-imposed sanctions against the country.

Votel said: “It’s pretty clear to us that they were trying to use that exercise to send a message to us that as we approach the period of the sanctions here, that they had some capabilities.”

That’s why the US sent a message back to Iran in their statement about the exercise, noting that they were “aware” of the increased Iranian activity in the region and were monitoring it closely.

Votel said: “We remain ready to protect ourselves as we pursue our objectives of freedom of navigation, freedom of commerce in international waters.”

He also commented on the status of the Bab-el-Mandeb waterway, where the Iranian-backed Houthis rebels recently attacked Saudi oil tankers, and said that it remained “open for business”.

AFP: Iran reiterated on Sunday that it was not...