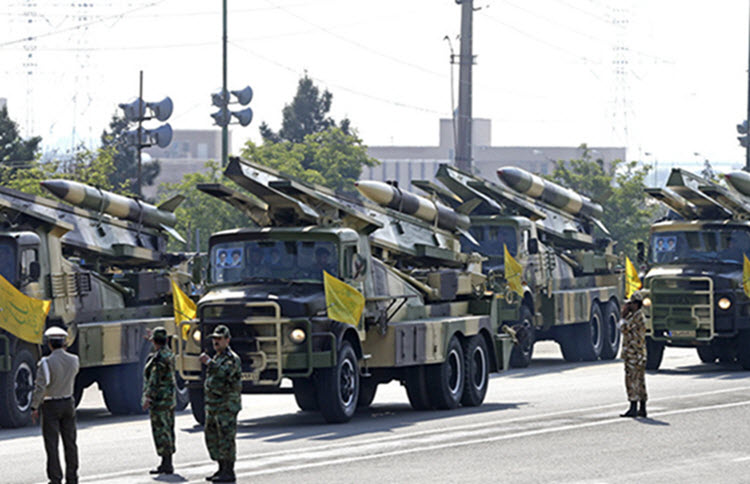 London, 25 Feb – Following Iranian leadership’s claim that its relations with the United States has rarely been so bad, as well as a recent US warning about Hezbollah’s growing role in the new Lebanese cabinet, the UK defense think-tank RUSI published a report saying that Iran’s smuggling of precision-guided missile systems into Lebanon represents the most “serious risk” of starting a major war that could involve the United States.

The report, entitled “Iran’s objectives and capabilities: Deterrence and Subversion” was released on Thursday. It highlights Iranian-led efforts to upgrade Hezbollah’s missile arsenal in Lebanon, calling it a dangerous regional flashpoint that could trigger an Israeli counter-strike. the paper added that Iran’s continued belligerence towards Israel threatens potential war through “miscalculation or a deliberate choice.”

“Iran’s bid to add guidance systems onto Hezbollah’s missile arsenal poses a serious threat to Israeli airfields and critical national infrastructure,” according to the report. “If this threat continues to expand, Israel may feel that it has no choice but to strike. Such a conflict is far from inevitable but policymakers need to work to reduce the risks of escalation.”

The report highlighted other potential clashes, such as between Iran and US-backed forces in Iraq, along with Iran’s nuclear ambitions, and Yemen. It also said Iran’s military strategy is based on building increasingly accurate rocket and ballistic missile technology that will be based in Iran and Lebanon. In the event of a war, they will be in position to attack US bases in the Gulf and critical national infrastructure in Israel. In Iraq, Iran’s navy could be used to harry and delay the build-up of US forces.

RUSI research fellow Dr Jack Watling concluded the report by saying, “The strategic objective of Iranian security policy is to make the cost of a war with Iran so high that diplomacy will always appear preferable.”

Since the 1979 revolution there have been tensions between Washington and Tehran, but they have increased after US President Trump exited the nuclear deal with Iran last year.

Iranian President Rouhani called the sanctions re-imposed by the US that target its oil and banking sectors a “terrorist act”, last Wednesday. State broadcaster IRIB quoted Rouhani as saying in a cabinet meeting, “The struggle between Iran and America is currently at a maximum.” He added, “America has employed all its power against us. The US pressures on firms and banks to halt business with Iran is one hundred per cent a terrorist act.”

US sanctions Iran for aiding Syria