Pompeo: Lebanese Leaders Want Iran out of Their Politics 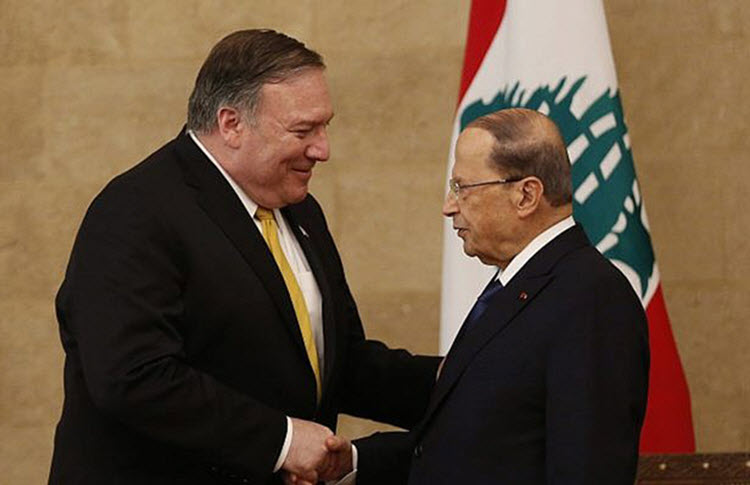 US Secretary of State Mike Pompeo said that all the Lebanese authorities he met during his visit to Beirut on Friday believed that it was important to keep their country’s political power out of Iran’s “meddlesome” hands.
The problem is that Iran-backed Hezbollah currently holds a lot of political power in Lebanon.

During an interview with Alain Dargham of MTV, according to the State Department’s website, Pompeo said: “I think they all understand the importance of keeping the political power out of the hands of the Islamic Republic of Iran. It’s been a consistent theme, something each leader I’ve spoken with has talked about.”

Pompeo also dismissed the unnamed sources who alleged that the Secretary of State was not happy after his meeting with Foreign Minister Bassil.

He told Dargham: “Oh, I don’t know who those folks are. We had a fine meeting. We had a conversation like all of my conversations yesterday that was very frank, that was very candid. That’s what friends do: they talk about how to move forward, how to work together.”

Whilst in Lebanon, Pompeo reiterated the stance of the Donald Trump administration by stating that “Hezbollah is merely a terrorist group”, backed by Iran, with the aim of “annihilating Israel, and even destroying Western Democracies, including the United States”. He also advised that Hezbollah is a threat to all Lebanese people, including Christians and Muslims.

How to tackle Hezbollah

During a press conference with his Lebanese counterpart Bassil, Pompeo said: “Lebanon and the Lebanese people face a choice: bravely move forward as an independent and proud nation or allow the dark ambitions of Iran and Hezbollah to dictate your future.”

He then promised that the US would continue to use all legal and “peaceful means” to stop Hezbollah, and by extension Iran, from increasing its power over the Middle East, including by choking off “the financing, the smuggling, the criminal network and the misuse of government positions and influence”.

Recently, the UK joined the US in placing the political wing of Hezbollah under the same sanctions that the military wing has been under for years.

IAEA cuts back aid projects in Iran in nuclear row

Reuters: The U.N. nuclear agency has cut back almost...