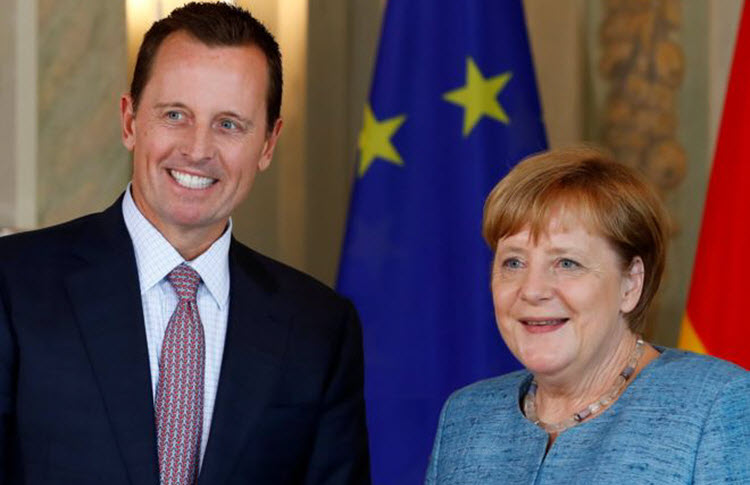 In a warning to Berlin, the Trump administration announced that it may scale back intelligence sharing if Germany allows the Chinese technology company, Huawei, to build Germany’s new 5G infrastructure.

German Chancellor Angela Merkel immediately shot back, saying that Germany would “set its own security standards.”

The German / U.S. relationship has been plagued with problems, not only from China, but from Iran as well. The U.S. expanded efforts to weaken the Iranian dictatorship, but Germany has been working to empower it.

America and Germany had a close relationship after World War II. In fact, the U.S. went to great lengths to ensure that Germany was treated fairly during the Marshall Plan negotiations. In an historic move, President Truman bypassed the Soviet blockade and executed the Berlin Airlift.

New global challenges are straining this alliance, particularly in dealing with Iran. Taking a more hardline stance than his predecessor, President Trump has attempted to implement an Iranian containment strategy,
because he believes that Iran poses a serious threat to U.S. security interests. He also wants Iran to stop funding radical Islamist terrorism and destabilization. Along with Israel and the Gulf Arab states, America wants to put the pressure on Iran.

Berlin believes that Tehran can be reasoned with if given financial incentives. Merkel, the de facto head of the European bloc, has worked to expand commercial ties with Iran, after the U.S. exited from the Iran Nuclear Deal.

In response to Iran’s use of the expanded economy that came with the deal to finance its regional meddling, Trump decided to unilaterally withdraw America from the nuclear deal and reimposed sanctions on Tehran. The president’s team also began to pressure America’s allies to reapply economic sanctions.

However, Germany did not back Trump. Merkel has tried to save the agreement. So did the remaining European signers, who began working to establish a new corporation that would allow companies to conduct business with Iran.

Merkel’s reluctance is disappointing, especially after Berlin refused to designate the Lebanese-based group, Hezbollah, as a terrorist organization. Hezbollah is financed by Iran.

Despite Merkel’s work, the Trump strategy seems to be winning out. Iran’s economy is in a downward spiral, and ordinary Iranians are taking to the streets, and pressure on the Mullahs. Merkel’s support could force a real behavior change in Iran, that could end its adventurism and benefit both American and German security interests.

Washington Times: Iraq is part of the much wider...