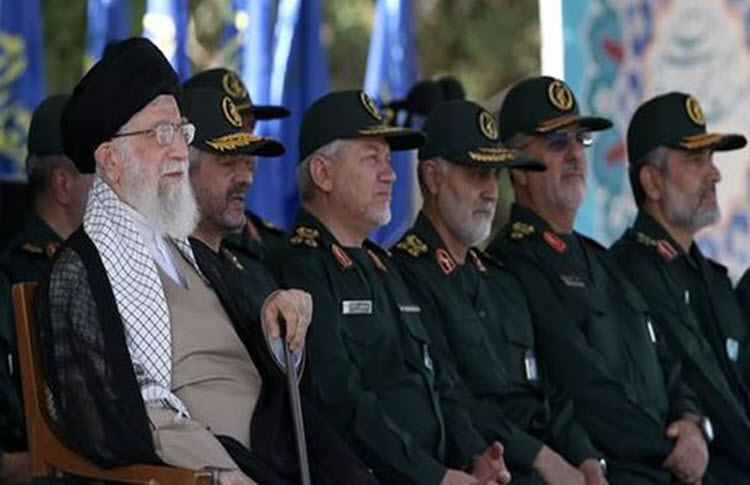 After the 1980-1988 war between Iran and Iraq ended, Iran needed to keep the demobilized soldiers from roaming the streets with nothing to do. The Islamic Revolutionary Guards Corps (IRGC) was their answer. Khatam-al-Anbiya Construction Headquarters, the biggest contractor for government projects, was established by order of Supreme Leader Ayatollah Ali Khamenei.

The Guards’ military engineering arm had resources from the war that could play an effective role in building the country and, “at that time, we gave them projects such as building roads,” Rafsanjani, then-president of the Islamic Republic, said in 2013. He added, “This was beneficial both to the country and to the Guards.”

Large infrastructure projects were contracted out to Khatam-al-Anbiya. The necessary precursor resources had to be imported. In order to finance these operations, they moved into other, unrelated businesses such as importing consumer goods and building their own ports. Within three decades, the IRGC became a hugely powerful financial and economic entity and contractor in Iran — a contractor who was also armed.

Former President Mahmoud Ahmadinejad called the Guards “brother smugglers”, and in 2017 his successor, Hassan Rouhani, said that the IRGC was “a government with guns” that had left no room for competition in the Iranian economy.

Although none could force changes to serve the public interest, four Iranian presidents have criticized the Revolutionary Guards in Iran’s economy. Now the Guards have the ailing Iranian economy in their grasp, and they must deal with American, European, and Canadian sanctions. The Guards are relied upon to acquire essential goods, and therefore play an ever-stronger role in governing the country. Now, President Rouhani has been forced to ask the Guards to take on major projects that the private sector is unable to finance.

The Revolutionary Guards operate under Supreme Leader Ayatollah Khamenei’s supervision, and under no means in a transparent way. Experts have no doubt that the IRGC’s presence in Iran’s economy has put the country’s economic life beyond the possibility of a healthy recovery or eventual normalization.

A few months after the re-imposed US sanctions became effective on the Islamic Republic, Mohammad Javad Zarif, Iran’s Foreign Minister told parliament that a number of Iranian merchants and money changers in the UAE were in trouble. Many were forced to relocate. Pressure on Iranian businesses in the Emirates started early in 2019, when the US Treasury Department added 25 Iranian individual and entities in the UAE and Turkey to its sanctions list because they were fronts for bypassing US sanctions.

“We are targeting a vast network of front companies and individuals located in Iran, Turkey, and the UAE to disrupt a scheme Iran has used to illicitly move more than a billion dollars in funds,” Treasury Secretary Steven T Mnuchin said. “The IRGC, MODAFL [Iran’s Ministry of Defense and Armed Forces Logistics organization], and other malign actors in Iran continue to exploit the international financial system to evade sanctions, while Iran funds terrorism and other destabilizing activities across the region.”

Life has a grown harder for Iran’s private sector because of the IRGC’s unauthorized and illegal infiltration into the economy. Consequences for the Iranian economy are devastating. Undercover and possibly illicit IRGC economic activities have escalated suspicions about Iran’s intentions among its neighboring countries. And with the new round of sanctions, the IRGC’s economic stranglehold on the Iranian economy is becoming more visible.

AFP: Mahmoud Ahmadinejad arrived in Vietnam Friday on the...

AP: President Bush on Saturday called for the release...