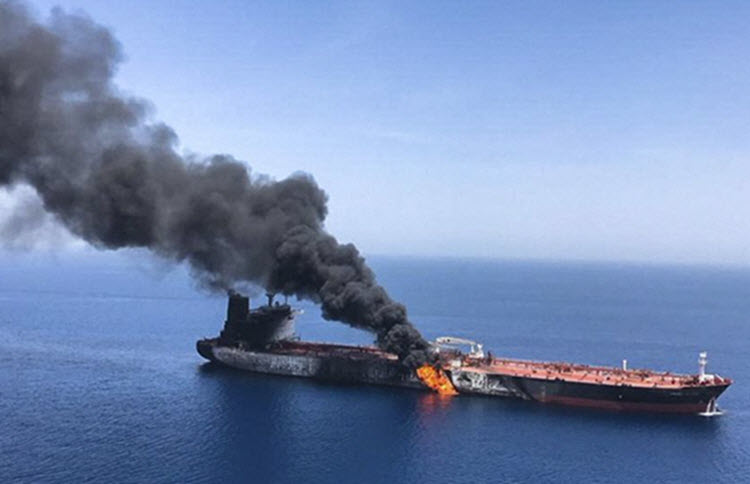 This is the second incident that has happened in the Gulf of Oman in the past month. The attack last month was attributed to Iran.

U.S. Secretary of State Mike Pompeo has said that the United States government is holding Iran responsible for the attacks. He said that this has been determined because of “intelligence, the weapons used, the level of expertise needed to execute the operation, recent similar Iranian attacks on shipping and the fact that no proxy group operating in the area has the resources and proficiency to act with such a high degree of sophistication”.

Saudi Arabia has also said that Iran is responsible with the Saudi Minister of State for Foreign Affairs Adel al-Jubeir saying that there is no reason for the kingdom to doubt the conclusion that the United States has come to.

Iran, of course, has denied any involvement in the attacks but the U.S. military has released footage in which it claims shows an IRGC guard taking an unexploded limpet mine off one of the vessels.

UN chief Antonio Guterres condemned the attacks on the civilian vessels and said that the world cannot afford a major confrontation in the region.

Leaders and officials from around the world have commented on the incident, expressing their concerns about escalation in the region.

Like the U.S., the United Kingdom is working on the basis that Iran is behind the incident, but it has said that it will be making its own assessment. Foreign Secretary Jeremy Hunt emphasised that the United Kingdom is taking the matter “extremely seriously”. He said that his “message to Iran is that if they have been involved it is a deeply unwise escalation which poses a real danger to the prospects of peace and stability in the region”.

The United States has called on the Security Council to meet to discuss the situation in the Gulf.

This incident is just one of a number of incidents that are a cause for major concern in the region. The Houthi rebels in Yemen that are aligned with Iran claimed responsibility for the firing of missiles on an airport in Saudi Arabia earlier this week.

Heiko Maas, the Foreign Minister of Germany, described recent events as dangerous because they could lead to escalation.

The foreign ministry of France has called for restraint and for a de-escalation of tensions in the region.

The Arab Coalition described the attacks as a “major escalation”.

The Foreign Minister of Kuwait said to the UN Security Council that the recent incidents are a threat to international peace and security and the country’s oil facilities have been put under high alert because of the potential of further attacks.

Bloomberg: OAO Lukoil, the Russian oil producer with the...

By Pooya Stone Alireza Zali the Head of the...