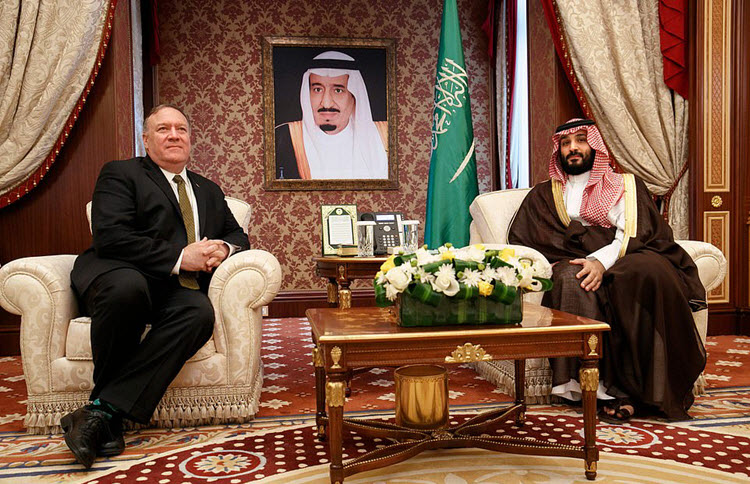 US Secretary of State Mike Pompeo met separately with Saudi King Salman and Crown Prince Mohammed Bin Salman on Monday at a time of growing tensions with Iran in the region.

However, the dining arrangements and the fact that MBS reportedly made Pompeo wait are leading some to believe that Saudi Arabia must be displeased that the US called off a military strike on Iran last week, in retaliation for the Iranian downing of a US drone in the Gulf of Hormuz.

This is unsurprising as Saudi Arabia has been a common target for Iran. Over the weekend, the Iranian-backed Houthis in Yemen used Iranian-built drones to bomb the Kingdom’s Abha Airport, killing one man and injuring several dozen people.

Saudi-coalition spokesperson Turki al Maliki criticised the Houthis and Iran for hitting non-military targets, which led to the killing and wounding of civilians on Saudi soil.

A senior state department official said, after Pompeo’s meetings in Jeddah, that the US hopes to counter Houthi and Iranian attacks against civilian targets in Saudi Arabia, as well as shipping targets in the Gulf. He revealed that the new “Sentinel” program will mean that the US keeps close tabs on Iran’s activities and will involve a number of US allies, including Saudi Arabia.

According to Emirates News Agency Wam, the pair discussed the “prospects for further consolidating the friendship and strategic ties between the two countries in addition to a number of issues of common interest”.

This global coalition against Iran was something that Pompeo saw as urgent on Sunday when he left for the Middle East on a hastily scheduled trip.

Pompeo said: “We are going to deny [Iran] the resources they need to [commit terrorist acts], thereby keep[ing] American interests and American people safe all around the world…. We’ll be talking with [our partners] about how to make sure that we are all strategically aligned, and how we can build out a global coalition, a coalition not only throughout the Gulf states, but in Asia and in Europe, that understands this challenge as it is prepared to push back against the world’s largest state sponsor of terror.”

Washington Post: The United States and its European allies...