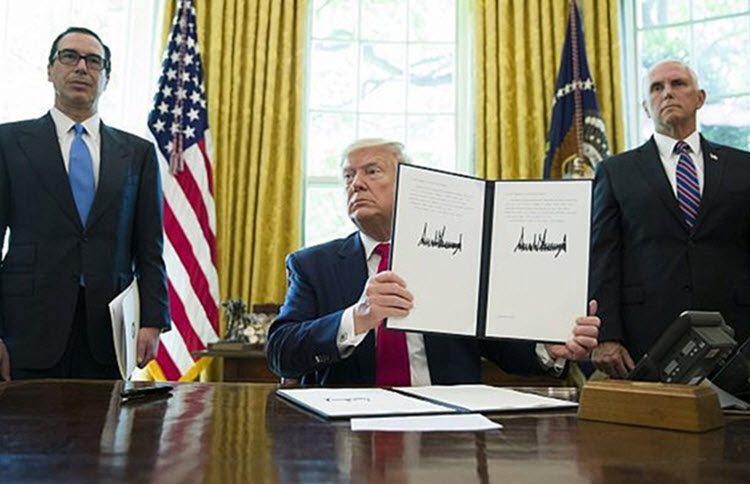 The US issued sanctions against Iranian Supreme Leader Ayatollah Ali Khamenei and other top Iranian officials on Monday, increasing pressure on Iran after the country shot down a US drone last week.

Donald Trump signed an executive order to impose the sanctions, which US Treasury Secretary Steven Mnuchin said will freeze billions of dollars more in Iranian assets.

Trump said this was in response to the drone attack, but would have happened anyway due to the “hostile conduct of the regime” in the Middle East.

This is the first time the US has sanctioned Iran’s head of state. Sanctions were also imposed on eight commanders of Navy, Aerospace, and Ground Forces of the Islamic Revolutionary Guards Corps (IRGC), which itself was designated as a terrorist group in May.

The Treasury Department said: “These commanders sit atop a bureaucracy that supervises the IRGC’s malicious regional activities, including its provocative ballistic missile program, harassment and sabotage of commercial vessels in international waters, and its destabilizing presence in Syria.”

Iran’s Foreign Minister Mohammad Javad Zarif is due to be sanctioned later this week.

The White House said: “Anybody who conducts significant transactions with these sanctioned individuals may be exposed to sanctions themselves.”

Trump said the sanctions are a “strong and proportionate response to Iran’s increasingly provocative actions”, including shooting down the drone and attacking two tankers in the Middle East two weeks ago.

In a joint statement, the US, Saudi Arabia, the UAE, and Britain all expressed concern over Middle East tensions and the dangers posed by Iran’s “destabilizing activity” to peace and security in Yemen and the region.

On Monday, the UN Security Council met behind closed doors to receive evidence from acting US ambassador Jonathan Cohen that Iran was responsible for attacks on commercial tankers in the Gulf in May and June. He called on the world to tell Tehran its actions were unacceptable.

The US is seeking to build a coalition to curtail Iran’s behaviour in the Middle East.

Trump said. “Never can Iran have a nuclear weapon. They sponsor terrorism like no one’s seen before. I look forward to the day when sanctions can be lifted and Iran can be a peace-loving nation. The people of Iran are great people.”

Trump was set to conduct a military strike on Iran but declined at the last minute to avoid 150 deaths.

U.S. pushes for U.N. censure of Iran, Syria on arms

Wall Street Journal: The Obama administration is pushing for a...