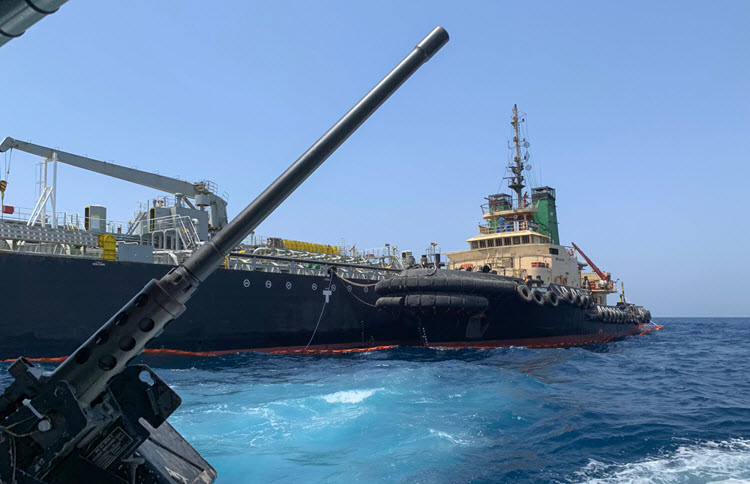 An elite Royal Navy bomb disposal diver team were sent to the Middle East to investigate the mine strikes which damaged two oil tankers just over two weeks ago in a suspected Iranian attack.

The bomb disposal experts from the Fleet Diving Squadron, who are supposed to be the world leaders in sea mine warfare, were sent to the United Arab Emirates to examine mine debris and inspect blast damage on the tankers last month and have just returned.

An MoD Spokesperson said: “We can confirm that a small team of UK military personnel deployed to conduct an inspection into the vessels attacked recently in the Gulf of Oman. The analysis is ongoing and it would be inappropriate to comment further at present.”

While sources have not gone into detail about the findings, they did confirm that “the UK shares the US assessment that Iran was responsible for these attacks”. The sources said that allies were keen to hear the intelligence assessment from the Royal Navy team, but the findings are still being looked at. Intelligence is likely to be shared soon.

The US blamed Iran’s Revolutionary Guard for the attacks on the Japanese Kokuka Courageous and Norwegian Front Altair, even providing photo and video evidence of the IRGC removing an unexploded limpet mine from the hull of one ship, but Iran has always denied it.

Following this, Iran shot down a US drone and the US almost launched a missile strike before turning back at the last minute to avoid casualties and using a cyber-attack to knock out Iran’s weapons systems instead.

Tensions have been rising between Iran and the US since the beginning of May when America sent the USS Abraham Lincoln carrier strike group and a bomber task force to the Middle East in response to ‘troubling and escalatory indications and warnings’ by Iran.

Shortly after, Iran vowed to enrich its uranium stockpile if other world powers do not help it evade US sanctions. The US increased sanctions on Iran.

Then, the US increased its military might in the region to counter threats from Iran by promising to move a Patriot missile battery and an additional 1,500 troops into the Middle East.

Then, there are two separate attacks on six commercial ships in the region that the US and others have blamed on Iran. The US responded by sending over 1,000 additional troops to the region.

When Iran shot down an American drone, the US responded with a cyber attack and new sanctions that target Supreme Leader Ali Khamenei.

AFP: Negotiations between world powers and Iran over the...

By Jubin Katiraie Some 18 businesses have been sealed-off...