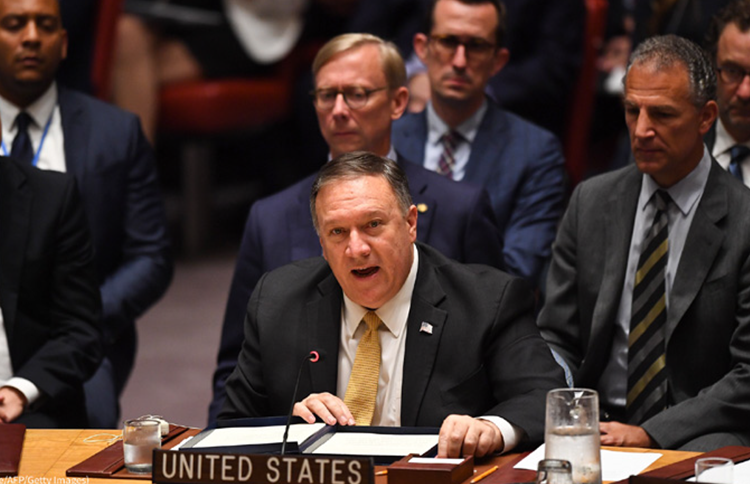 Mike Pompeo, the United States Secretary of State, has cautioned against allowing an arms embargo on Iran to expire in October 2020, tweeting that it was like a “#CountdownToTerror”.

This push to extend the embargo is part of the US’s ongoing maximum pressure campaign against Iran, designed to change Iran’s behaviour and implemented after the US left the Iran nuclear deal in May 2018 and began reimposing sanctions.

During an address at the United Nations on Tuesday, Pompeo said: “Time is drawing short to continue this activity of restricting Iran’s capacity to foment its terror regime. The international community will have plenty of time to see how long it has until Iran is unshackled to create new turmoil, and figure out what it must do to prevent this from happening.”

On the same day, the State Department released what Pompeo described as a “#CountdownToTerror clock”, which is tracking the time until the expiration of the arms embargo and travel ban on Qasem Soleimani, the head of the Revolutionary Guards’ Quds Force, which is responsible for foreign operations. Both groups are considered terrorist entities by the US.

The United Nations arms embargo, which covers all weapons sales and “related material” to Iran, is set to be lifted five years after the adoption of the nuclear deal.

While speaking to reporters, Pompeo also warned that the international community should not help ships believed to be carrying illicit crude oil from Iran in violation of US sanctions.

He said: “We’ve made clear anyone who touches it, anyone who supports it, anyone who allows a ship to dock, is at risk of receiving sanctions from the United States of America. So if that ship again heads to Syria, we’ll take every action we can consistent with those sanctions to prevent them.”

These comments came shortly after reports that Iranian tanker ‘Bonita Queen’ was delivering crude oil to Syria, which is also a violation of European Union sanctions on Syria. Tanker Tracker, a company that tracks oil exports using satellite technology, said the Bonita Queen was sailing toward Syria carrying about 600,000 barrels of oil.

The Bonita Queen doesn’t fly Iran’s flag but is managed by the same company as the Adrian Darya 1, formerly known as the Grace 1.

The Adrian Darya 1 was impounded in Gibraltar last month by the UK on suspicion of carrying oil to Syria. The ship was released on Sunday, despite US attempts to stop the tanker on Friday by issuing a warrant for its seizure.

One person dies every two hours from drug addiction in Iran