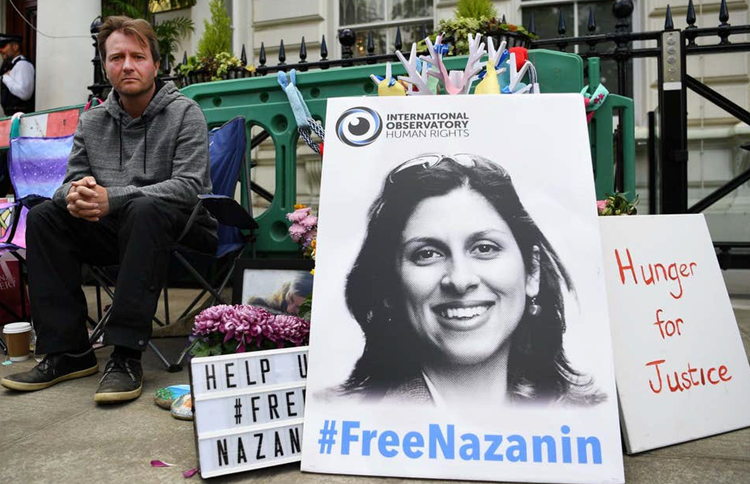 The British charity worker wrongfully jailed in Iran is now having her access to her family restricted, according to her husband.

Richard Ratcliffe explained that new rules instituted by the Iranian authorities mean that Nazanin Zaghari-Ratcliffe can’t make international calls to him in London and is only allowed to see their five-year-old daughter, who is being looked after by her grandparents in Tehran, once a month.

Ratcliffe, from West Hampstead, said the rules were implemented when she returned to prison on Saturday after a stint in the hospital, following a hunger strike. Previously, Zaghari-Ratcliffe had been able to see her daughter, Gabriella, every few days.

Zaghari-Ratcliffe, 40, reportedly told her family the restrictions were cruel and unjust, saying that she felt she could “suffocate” and that she hasn’t “cried so loud… for ages”. Ratcliffe said his wife has protested the changes in a letter to the Iranian prison authorities.

Ratcliffe said: “The phone calls are one thing but not being able to see Gabriella… that’s really tough… Boris Johnson, when he was foreign secretary, made a clear promise to leave no stone unturned [with regard to Zaghari-Ratcliffe’s release] we want to hold him to that promise.”

The Foreign Office responded that it “remains extremely concerned” about Zaghari-Ratcliffe’s welfare and the restrictions on her access to her family. They said that Foreign Secretary Dominic Raab expects to raise her case with Iran’s foreign minister Javad Zarif and to arrange a meeting with Richard Ratcliffe soon.

A representative added: “We continue to regularly raise her case at senior levels, including our embassy in Tehran, pressing for consular access and we are in regular contact with Mrs Zaghari-Ratcliffe’s family.”

Zaghari-Ratcliffe, a dual citizen, was arrested at Tehran’s Imam Khomeini Airport in April 2016 after she and Gabriella, who only has British citizenship, visited relatives for the Iranian New Year. She was convicted of spying, which she denies, and sentenced to five years.

She was previously denied contact with her husband temporarily after announcing her first hunger strike in January. Then, in March then-Foreign Secretary Jeremy Hunt granted her diplomatic protection, a move that gives the UK the option to take international legal action against Iran.

Of course, Zaghari-Ratcliffe is not the only UK resident jailed in Iran.

Aras Amiri, an Iranian citizen with permanent residency in the UK, has lost her final appeal against a 10-year jail sentence for spying for Britain because she refused to make a false confession in order to be released.

Amiri, 34, wrote a letter to the head of the Iranian judiciary, accusing him of imprisoning her just because she had worked for the British Council.

While social anthropologist Kameel Ahmady, a British-Iranian dual national, was also arrested last week according to his wife, but no reason was given for his arrest.

The UK Foreign Office has warned all dual nationals against travelling to Iran because of the risk of arbitrary detention.

Nuclear talks can resume from Sept 1 if conditions met: Iran

AFP: Iran on Tuesday set September 1 as a...

Reuters: Iran needs up to 15 nuclear plants to...