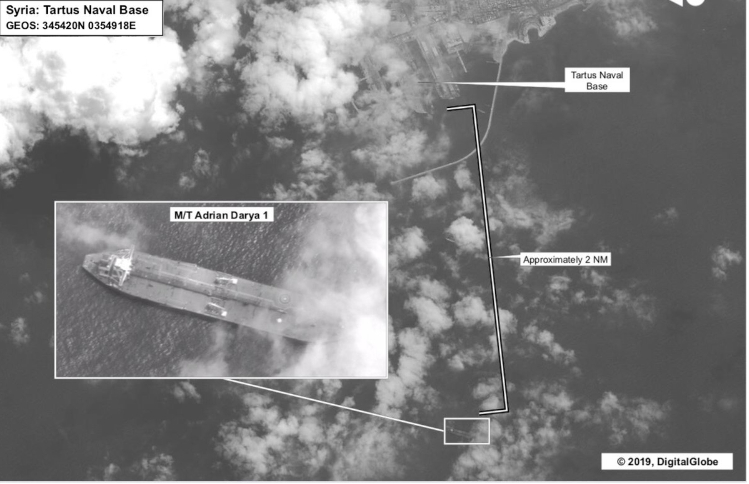 The UK government has issued a statement in response to the news that Iran delivered oil to Syria in the Grace 1 tanker, despite its assurances that it would not.

The vessel, also named Adrian Daraya-1, was spotted stationed near a Syrian port. Satellite images have emerged proving this, with greater concerns that Iran’s belligerence is starting to increase.

The vessel turned off its tracking beacon at the beginning of the week and speculation that it would be heading towards Syria has turned out to be correct. The vessel was carrying 2.1 million barrels of Iranian crude oil with an estimated worth of approximately $130 million.

The ship’s transponders were switched off when it was around 83 kilometres off the coast of Syria and it was heading northwards.
US Secretary of State Mike Pompeo said that the vessel, according to intelligence reports, will be heading to Tartus, a Syrian port town close to where it was last seen.

Iran has been using this tactic – switching off transponders (or Automatic Identification System AIS) – in order to avoid being detected while trying to deliver cargo. This has been happening with greater frequency in recent months since the US sanctions targeting the country’s energy industry have been taking hold.

The UK Foreign Secretary Dominic Raab has summoned the Iranian ambassador to the UK – Hamid Baeidinejad – to a meeting to discuss the latest developments. He is expected to question the ambassador about Iran’s actions and to ask why it has failed to honour its assurances that the oil would not be brought to Syria. The same assurance was asserted by Iran on a number of occasions, including one that was in written form.

British officials believe that the oil was offloaded onto smaller vessels, following intelligence reports indicating this likelihood.
The British Foreign Office said: “It is now clear that Iran has breached these assurances and that the oil has been transferred to Syria and Assad’s murderous regime. The Foreign Secretary has today summoned the Iranian Ambassador to condemn Iran’s actions. Iran’s actions represent an unacceptable violation of international norms and the UK will raise the issue at the United Nations later this month.”

Foreign Secretary Raab said that the sale of this oil to the “brutal” Assad regime is “part of a pattern of behaviour by the Government of Iran designed to disrupt regional security”. He also highlighted a number of other acts of belligerence that Iran is responsible for including the provision of weapons to Houthi rebels in Yemen and the material support that it is providing to the Lebanese Hezbollah group that he described as “terrorist”.

The Foreign Secretary also drew attention to the increased pattern of hijacking commercial ships, emphasising that Iran is a threat to global commercial shipping. He said: “We want Iran to come in from the cold but the only way to do that is to keep its word and comply with the rules-based international system.”