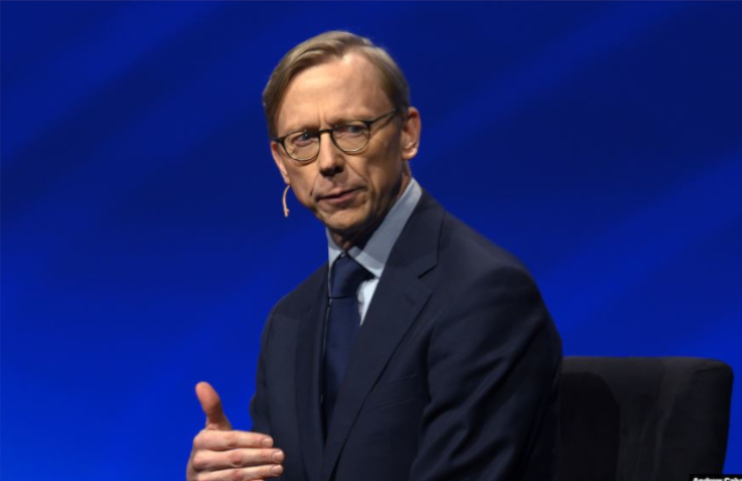 US Special Representative for Iran Brian Hook spoke yesterday, 23 September at Asia Society, where he focused on Iran.

Regarding the Iranian government’s support for terrorism in the region and the US policy among Iran, Hook said:

“President Trump called out Iran for its continued support of terrorism. He condemned the Islamic Republic for fueling the fires of sectarianism and called on all nations of conscience to work together to isolate Iran and deny it terrorist funding.

“Since the President’s visit in May, the United States has imposed unprecedented pressure on the Iranian regime to do just this: deny it funding for terrorism.”

Mr. Hook added: “Our pressure is making the regime’s extremist foreign policy and the ideology that drives it more expensive than ever before. This was long overdue. The regime has spent at least $16 billion supporting proxies in Syria, Iraq, and Yemen over the last several years. It has spent hundreds of millions on the Houthis. It has provided Hizballah almost $700 million annually and gave more than $100 million a year to Palestinian terrorist groups like Hamas and Palestinian Islamic Jihad.”

Defending the US maximum pressure policy, Mr. Hook pointed out: “Our maximum pressure campaign is reducing this cash flow and depriving the regime of billions in revenue. Our oil sanctions alone are denying the regime up to $50 billion. Iran’s proxies, including Hizballah, are already complaining of a lack of funding. As our pressure continues, it will become harder for Iran’s proxies to get by. We call on all nations to join us in this effort. It is the right and responsible thing to do, morally and strategically.”

He added: “If we hope to realize a more stable Middle East and a brighter future for its people, we must appreciate the Islamic Republic’s ideological commitment to exporting revolution. The world must together press the regime to change this behavior and to play by the rules. There is no more fitting time or place to have this discussion than on the margins of UNGA today.”

He analyzed the ideology of the Iranian regime saying: “In remarks on the eve of Nowruz in 1980, Khomeini underscored that spreading the revolution was at the heart of the Islamic Republic’s founding. “We shall confront the world with our ideology,” he said. “We should try hard to export our revolution to the world.

“With the rise of Islamist terrorist groups like Al Qaeda and ISIS today, we have grown accustomed to this kind of extremist rhetoric and the global jihadi aspirations of violent Islamists.”

Mr. Hook said: “The current Supreme Leader, Khamenei, has remained faithful to this vision of revolutionary expansionism. In a 2013 speech to religious leaders, he reaffirmed that the, ‘final goal cannot be anything less that creating a brilliant Islamic civilization’ encompassing many countries.
“Under his rule, Iran has maintained its support to terrorist proxies, expanded its funding to Shia militias in Syria, Yemen, and Iraq, and continued to organize acts of terrorism globally.

“Over the last 40 years, there has been a remarkable consistency to how the Islamic Republic has sought to advance its foreign policy of revolutionary expansionism. It has and continues to view foreign relations as a way of solidifying its revolution at home and extending it abroad.”

Brian Hook also spoke about the role of Revolutionary Guards (IRGC) and said: “The best example of this is how the regime leverages and unleashes on the region its Islamic Revolutionary Guard Corps, or IRGC. The IRGC appears on the surface to operate like a traditional military force. It has an air force, navy and special operations branch. It has a traditional command and control structure. It has generals, training facilities, and internal doctrines. Accordingly, it benefits from the privileges afforded to Westphalian states.

“Yet look under the hood, and there is very little normal about the IRGC. At its core, it is a corrupt organization designed to protect the revolution at home and advance the regime’s revolutionary ideology abroad. It has institutionalized terror. It fuels regional instability. And it protects the narrow interests of Iran’s corrupt elite. The IRGC exports Iran’s revolution to places like Iraq, Lebanon and the Palestinian territories. Revolutionary expansionism is at its core.

“Take for example the IRGC’s decades-long involvement in Lebanon. Since the early 1980s, the IRGC has undermined Lebanese sovereignty to cement Iran’s influence in the Levant. The regime has historically provided Hizballah with as much as 70 percent of its operating budget.”

Mr. Hook added: “We can also look to the IRGC’s role in Yemen. There, the Islamic Republic feigns support for diplomacy, while using the revolutionary tools of the IRGC to undermine peace and security.

“As I wrote in a recent Wall Street Journal editorial, Iran is using Yemen to increase its status as a regional power and extend the borders of its revolution yet again. IRGC military assistance has allowed the Houthis to challenge the authority of the Yemeni government in ways that otherwise would not have been possible. The IRGC provides the Houthis with hundreds of millions of dollars and an arsenal of advanced weaponry. Anti-ship missiles, explosive-laden boats and mines have flowed into Yemen, thanks to Khamenei.”

Brian Hook pointed out that the Iranian authorities almost lying and said: “Nations look the other way, pretending to believe Foreign Minister Zarif’s version of reality, even when they know it’s false.

“To give a recent example: Nations watched video footage of the IRGC Navy handle a limpit mine next to a tanker that was set on fire by the IRGC Navy on June 13. Zarif told the world that the navy was actually coming to the rescue of the crew and was dismantling the mine.”

He continued: “The international community, including the UN, buys into this routine more often than it challenges it. Take for example a few months ago when the UN appointed the Islamic Republic to a seat on the Commission on the Status of Women. The commission promotes gender equality and women’s empowerment. By the UN’s own standards, Iran has no place on such a body.

“In Iran, according to the UN Special Rapporteur Report on Human Rights in Iran, women who do not wear a veil are subject to a prison sentence, flogging or a fine. Iranian women peacefully advocating for their rights are routinely subject to harsh punishments.

“Inviting Iran to serve on this Commission was like inviting the arsonist to help put out the fire. It is, however, standard practice now. Rather than challenge the Islamic Republic’s policies, the first instinct is to accommodate and make room. This approach rewards the Islamic Republic’s bad behavior, and invites even more of it.

“However, until then, our pressure will continue. We are raising the costs of Iran’s revolutionary adventures while increasing incentives for pragmatism to prevail. The international community needs to be a part of this effort. Nations around the world need to hold Iran accountable and join us in pressing for behavior change. Silence amounts to complicity.”

Iran says possible response to new U.S. sanctions could not be ‘pleasant’